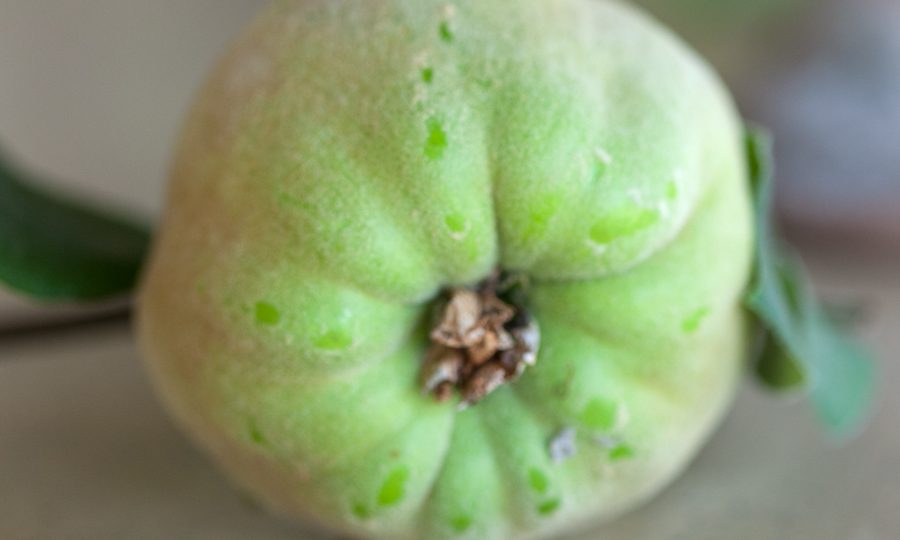 Quince is a late fall fruit that is a perfect addition to the Thanksgiving table.

Well-suited for preserving, quince is naturally high in pectin, a thickening agent for jams, jellies, and confections. The fruit is perhaps most famously known in the form of membrillo.

Nutritional Information
Quinces are high in Vitamin C and fiber. The seeds and fruit are used in herbal medicine to treat digestive problems and cough.

Storage
Store quinces on the countertop for up to a week, or in the fridge in a paper bag for several weeks. It’s said that quince used to be stored in household closets to scent linens and clothing!

Preheat oven to 350ªF. Peel quince and cut into quarters with a heavy chef’s knife. Cut out the core with a sturdy paring knife, then slice quince into ¼ inch slices.

Place the quince, white wine, white wine vinegar, sugar, sea salt, vanilla bean, and peppercorns in a small roasting pan. Cover with parchment paper and then foil. Bake until quince is rosy in color and tender, about one hour.

Strain off the liquid and let it cool, then stir in champagne vinegar.

Chill in the refrigerator.

To serve, pour two tablespoons in a glass with ice and add sparkling water.

The leftover quince can be served as a condiment to roasted meats such as turkey or pork, as an accompaniment on a cheese plate, or a topping on yogurt.