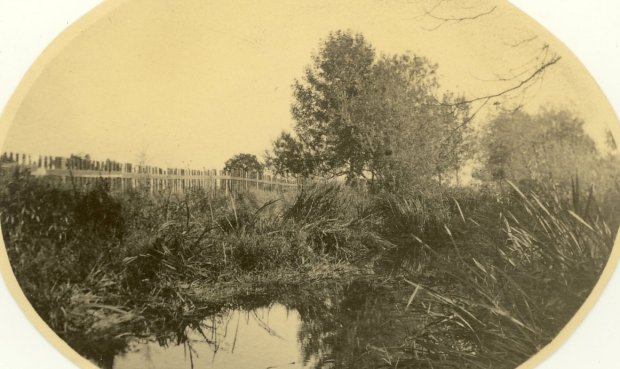 They say a man never steps into the same river twice. But what if he steps into what used to be a creek, then became a slough, and then became a creek again? Perhaps then, he's stepped into a story.

Foss Creek, the Russian River tributary that we quite literally overlook here at SHED, is a waterway that has been through a few such changes in identity. Like all natural resources, it has had an evolving relationship with the region’s human population. Since the time of early settlers, Foss has transitioned from utilitarian waterway to beloved neighborhood creek – a storied past that we’ll learn about in our free community talk and creek walk tonight in the Grange from 5-7:30pm.

In Healdsburg’s early days, people knew the creek to be wide, full, and as one pioneer enthused, a great place to raise ducks. In Healdsburg Tribune editions from the 1880s, a time at which fishing reports were regularly served along with local news, it was noted that the creek teamed with trout after a heavy rainstorm. After one such rain, a local resident was lauded for catching 50 trout one day, 60 the next.

But as Healdsburg’s population grew in the late 1800s, the creek was used for more industrial purposes. A tannery and gristmill were built alongside its banks, and its waters were used to carry away production waste. Residents also used the creek for household waste in the days before indoor plumbing was common.

Near the turn of the last century, the creek was known as Norton Slough, and served as a dividing line between the more and less desirable parts of town. The illicit area on the Western edge of Healdsburg had its dance halls, brothels, saloons, and other houses of ill repute a mere footbridge away from the tidier lives of "decent" citizenry.

After a century or more of misuse, the creek became overgrown with wild brush and liable to flood. It occasionally did and could cause serious damage — something many current residents will remember. But now, thanks to Russian Riverkeeper’s Foss Creek Community Restoration Project, much of the invasive non-native plants have been removed, which has reduced flooding impact and improved wildlife habitat along the creek. Today, depending on season and rainfall, the former slough is home to crayfish, sculpin, and even the occasional otter.

At tonight’s community creek walk, Don McEnhill, executive director of Russian Riverkeeper, and Jack Sorocco, longtime Healdsburg resident and raconteur, will reveal the history of Foss Creek through colorful stories and historic photographs, then lead us in a guided walk down a portion of the creek to point out ecological and historical features of note. Families are welcome. Bring your walking shoes, your camera, and get ready to take a trip up the creek and back in time.

Many thanks to the Healdsburg Museum and Historical Society for the use of their archive and images. 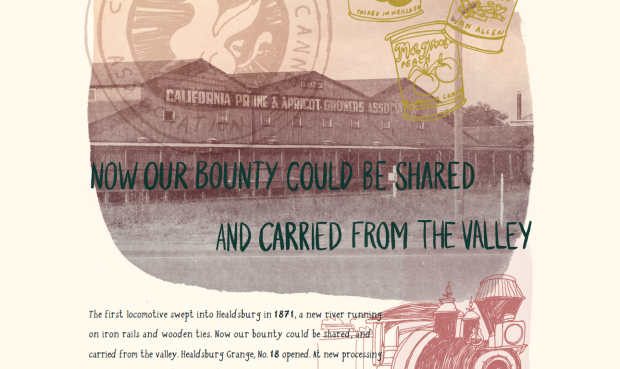 When we tell SHED's story, we must always tell Healdsburg's story. SHED is a reflection of Healdsburg's evolution and its agrarian history.

We've been fortunate enough to work with cultural historian Makalé Faber-Cullen and her partner, filmmaker Enrico Rossini Cullen, on a number of projects that tell that story. Makalé researched and designed the story scroll we're installing in our stairwell.

Working with the Healdsburg Museum and Historical Society, Makalé was able to draw upon old photos and texts to bring a fresh vision of our past, and she encapsulates it beautifully in this video:

Working with Enrico, the pair also created an origin story for SHED that explicates our ideals as well as shines a great spotlight on the artisans and growers we've been fortunate enough to work with:

We hope that you enjoy watching these as much as we do!