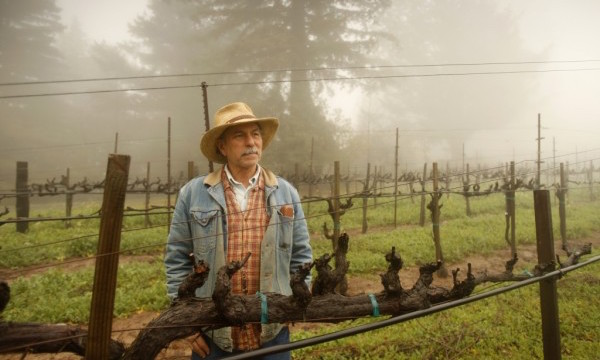 When David Hirsch bought his wild far away mass of land way up on the high north coast of Sonoma County in 1978, it was intended to be a retreat. He had a home and a robust business as a woman’s clothier at home in Santa Cruz; he didn’t need niceties at his get-away.

Not that there were any. No water, no electricity, no structures marred the rugged 1,100-acre parcel that formerly had been home mostly to sheep.

But there was the ocean 1,500 feet below, there were fir and conifer trees, there was volcanic soil and metamorphic rock and deep gullies and chilly fogs and freaky night heat and, as Hirsch came to discover over the ensuing years, fragments of weather from every part of California flowing vigorously and regularly across his hills.

He certainly didn’t intend to farm wine grapes on the land. No one in the vicinity raised anything more delicate than lambs or redwoods. When in 1980 a Santa Cruz winemaking friend pronounced the land excellent for Pinot, Hirsch decided it would be a kick to put in a bloc, adding a couple of blocs of Riesling for good measure, trying out a little hobby patch on two acres. Just for fun.

That original Pinot still thrives today, one of 68 acres planted to Pinot with some Chardonnay to balance, arranged in some 60 different parcels. Because that’s how crazy this land is. Temperatures can range 20 degrees within a mile. The soil composite of one parcel seems to have come from a continent different from the one beside it. It might have.

This unruly tract so extremely defined by the San Andreas fault that the 1906 earthquake remains a fresh story drew Hirsch all the way in. By 1987 he had moved his family there, having “gotten the bug to be a grape grower,” he says.

He grew and sold fruit until he got the wine-making bug. There’s really nothing prosaic about it. “While the wealth is in the land,” Hirsch recites, “the cash flow is in the bottle.”

Errors were certainly made and nature certainly bore them badly. Regularly receiving 80 inches of rain a year, Hirsch’s land was inundated with 150 inches during the El Niño storms of 1998. Poorly chosen rootstock and bad planting practices made it apparent, Hirsch says, that “we had made some serious mistakes.”

In partnership with his farmer Everardo Robledo, he studied up on soil, became a self-proclaimed amateur agronomist, and embarked on “a new approach to farming.” Today, the land is biodynamically tended with an eye to its holistic health.

And if there is one stone truth, it’s that biodynamic farmers are poets. Paying attention, that’s all it is.

“We’re on the San Andreas Fault,” Hirsch explains. “Below the tectonic plate, you’ve got that molten material of Mother Earth, that pure earthen material, and if you’ve ever been on new lava and you smelled how fresh and vital it is, you know.

“You get a sense of how the Earth was before when it was young and innocent and fresh and that whole energy – the enormous pressure, the North and Pacific plates rubbing against each other – that energy is coming up and that infuses the site here.”

When he first bought the land, Hirsch thought of it as “Appalachia East,” he says, and reckoned it would take about 200 years to heal it from the ranching, the logging that helped rebuild San Francisco after the ’06 earthquake, and the topsoil loss. He’s willing to wait.

“The reason that we’re doing all of this is restore the health of the land,” he says. “And then we discovered that the vineyards are a gold mine. They can support the restoration of the land. We don’t have to carve it up into 10-acre vineyard sites.”

This gold mine depends on liquid, the entirely eccentric, deeply delicious, tremendously female, award-winning Pinots that flow each year from Hirsch’s tanks to a few thousand cases eagerly purchased only by allotment. Hirsch (actually, his daughter Jasmine, the winery’s general manager) tells you which and how many of his wines you can buy, not the other way around.

Distinguished by what the winemaker doesn’t do, Hirsch Pinots exactly reflect the 60 parcels from which they’re sourced, the pounding winter rains that drench those parcels, the Fresno heat that blows over some of them at 2am, the thin trampled hillsides they cling to, the vital pulsing fresh young molten earth below them all.

“The Buddha said that if you’re looking for perfection, the only perfection you’ll find is the average of billions and billions of imperfections,” Hirsch says. “That’s Pinot. It’s the most adaptable of all the varieties; it’s the most sensitive to the environment.

“It’s like people,” he continues. “Anyone who tries to make ‘the perfect Pinot’ is missing the point. It’s really better to trust in your site, be responsive in the active mode, listen to the site, listen to the vines, taste the fruit, let the yeast make the wines.

“Throw out all of this technology and over control of the site, and the Pinot will reveal itself.” 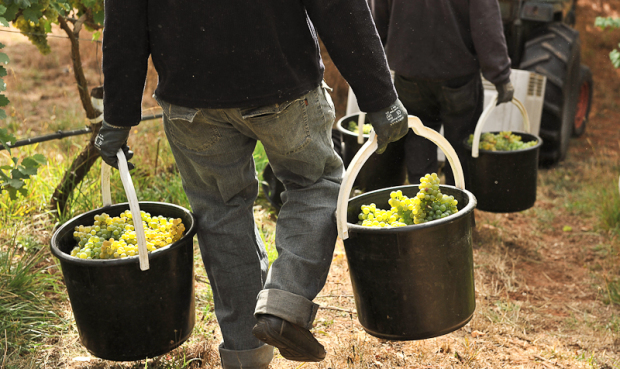 We conclude our six-month-long Biodynamic learning series on Sunday, March 1, in the most appropriate manner possible: With a toast.

END_OF_DOCUMENT_TOKEN_TO_BE_REPLACED 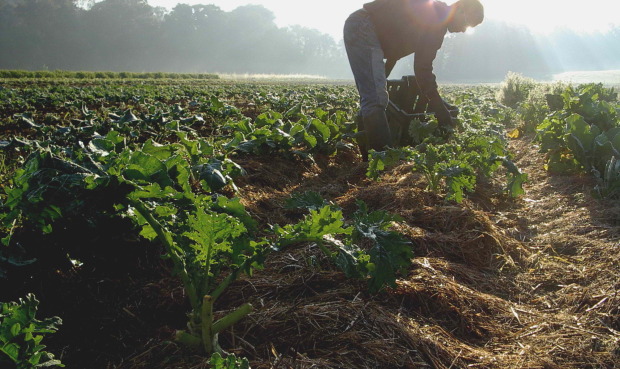 The methods that came from the factory floor to the farm in the late 1800s coupled with technology developed to serve WWI had made a startling dent in the fields by 1924. That was the year that Rudolf Steiner, founder of the Waldorf school system, addressed a group of farmers in a town now found in Poland about methods and practices to redress what then was organic farming and was then beginning to fail.

Today, we call it Biodynamic farming and it is in huge increase around the globe. Grape growers have particularly embraced it as a way to combat the monoculture that large grape production can cause. Europeans have embraced it because Biodynamic farming practices serve the soil and every inhabitant upon that soil, from the insects to the bees to the plants to the people. And slowly, Americans are beginning to understand that foods and wines produced in the Biodynamic method are healthier not only for people, but for the very land itself.

Here in the U.S., Biodynamic farming and food production is overseen by Demeter USA, the national certification organization that precedes the USDA Organic Certified seal by some 17 years. We are proud to support Biodynamic education and to help spread the word about this rapidly increasing practice.

To that end, we host a series of educational workshops on Biodynamic farming and products the first Sunday of each month, Oct. 5, 2014, through March 1, 2015. Presentations are at 10am unless otherwise noted.

We hope that you'll join us for some or all of this series. Here's a sneak peek at what you can expect:

Oct. 5: Elizabeth Candelario, co-director, Demeter USA. Wonder what all the Biodynamic buzz is about? Our series kicks off with a discussion about the origins of organic and Biodynamic agriculture and an exploration of the trends in Biodynamic food and fiber.

Nov. 2: Cynthia Sandberg of Love Apple Farm. The practice of Biodynamic farming means adhering to organic, holistic, and cosmic tenets. Learn the differences between organic and Biodynamic growing and how to integrate its principles into your garden from Cynthia, who has partnered with renowned chef David Kinch and his Manresa restaurant in order to remain sustainable.

Dec. 7: Colum Riley of Malibu Compost. Explore how healthy soil functions and how composting and Biodynamic preparations can bring unhealthy soil back to life. Learn methods, materials, and uses for your own home garden or farm.

Jan. 4: Michael Thiele of Gaia Bees. Biodynamic apiculture treats the honeybee nest as "One Bee-ing" in its formation and life gestures. This class will explore current issues to the health of bees, and asks what they and we need to survive together. Michael is truly a miracle man who understands what our bees need to survive. And if they don't survive — neither do we.

Feb. 1: Harald Hoven of the Rudolf Steiner College. Learn how to use the astronomical calendar to guide your decision making about planting, cultivating, and harvesting your crops.

March 5: The wine industry was an early American adopter of Biodynamic farming. As a grand finale to our class series, and with a glass of wine in hand, we will hear from grape growers and winemakers who are pushing the envelope on ecological farming and product quality. Note: This is a 5pm event. 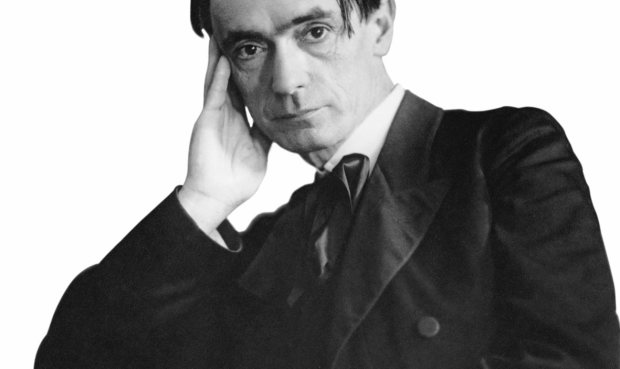 In the 1920s, farmers were practicing what we today might call "organic" farming. Roundup was not yet a gleam in anyone's eye. But the Industrial Revolution was pushing from the factory floors to the fields and producers who were naturally grateful to ease their heavy workload eagerly embraced their day's modern technologies.

But European farmers concerned with a noticeable decrease in crop yield and quality gathered in a town now within Poland's borders in June of 1924 to hear Rudolf Steiner prescribe an antidote to their ills. Steiner — perhaps best known for devising the Waldorf educational method — gave the first of several "Agriculture Lectures" that counseled farmers to look backwards, not forwards, when seeking to heal their land and increase their harvest.

Steiner proposed that the farm and all of its inhabitants — from the insects to the humans and certainly, its soil and plants — were part of a complete organism and therefore interdependent for optimal health and growth. Return to the lunar cycle for planting, he advised. Let the animals feed the soil that, in turn, feeds them. View your farm as a holistic entity.

We call that Biodynamic® farming. (Interestingly, the term "organic" was derived from Steiner's use of the word "organism.") Biodynamic is organic and then some. While both methods greatly restrict the use of additives not found in nature, Biodynamic farming goes beyond organic in seeking to use cyclical agricultural methods to heal the earth and its inhabitants.

Like organic, Biodynamic farming is subject to rigorous certification to protect both the consumer and the producer. Here in the U.S., the certification entity is Demeter USA. Its co-director, Elizabeth Candelario, is a Healdsburg resident, which closes the loop for us nicely.

Given the dangers of monocropping, wineries have been early Biodynamic adopters. In Sonoma County, Quivira, Littorai, and Benziger wineries are among those that have made the change.

Our own HomeFarm has long practiced organic and Biodynamic principles and is in the process of becoming certified for both. So does Lou Preston's Preston Farm and Vineyard, which provides produce to SHED, as does Front Porch Farm, already certified Biodynamic. Neither our farm or the others are doing this because it's particularly easy; in fact it's a huge and ongoing challenge to know and care for a piece of land. As Lou Preston says, we do it "to protect the health of the farm and its denizens, ensure the quality and uniqueness of their food products, and provide the basis of a truly sustainable farm system".

In his first Agriculture Lecture, delivered almost exactly 90 years ago, Steiner lamented, "The more intimate influences which are at work in the whole Universe are no longer understood." But perhaps, the further we creep along in the centuries, the better the wisdom of the ages will be understood.