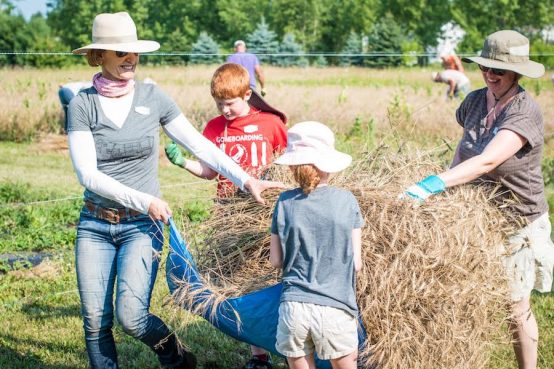 Fifteen years ago, Episcopal vicar Elizabeth DeRuff was presiding over the eucharist at a retreat center in Healdsburg when a congregant declined to take communion. This wasn’t unusual, but the woman’s reasoning was, at least for the time: she was allergic to wheat and certain that eating the Bread of Heaven would make her sick.

Cut to 2010. The number of people avoiding gluten is trending upwards (it will go on to triple over the next 8 years). It’s a post–South Beach Diet world. Bread is now seen as a guilty pleasure at best. But that moment at the altar is still firmly lodged in Elizabeth’s mind. As she puts it now, “what does it say about our food and farming systems if someone can be allergic to the food that is the very symbol of all food?”

That year while working on an agricultural service project, Elizabeth met a farmer who was growing heirloom wheat—wheat which, seemingly by magic, even gluten-sensitive people could eat with abandon. The problem for most people wasn’t actually wheat or gluten but rather industrial processing, which strips grains of their nutrients and divorces bread from traditional sourdough fermentation, which makes wheat more digestible. The problem was equally compelling to her from a theological point of view: the supply chain behind most communion loaves hardly reflects care for creation. Thus began Elizabeth’s 8-year deep dive into the science and spirituality of wheat, and thus began Honoré Farm and Mill.

Honoré is a nonprofit that integrates spiritual care, climate action, and heirloom grain stewardship. In practice, their work is multifaceted: Honoré grows, mills, and sells Red Fife and Sonora wheat (and incredible shortbread cookies!), hosts sourdough classes and educational workshops, and runs a flour and communion wafer CSA for churches. In 2016 they crowdfunded a mobile stone mill to travel to schools, churches, synagogues, and markets.

The mobile mill was Honoré’s answer to what Elizabeth sees as the biggest barrier to thriving grain economies: lack of infrastructure. There used to be more than 20,000 stone mills around the country, but now that industrial agriculture is the status quo there are just a small handful. In fact, when Elizabeth first started working on heirloom grain issues she had to drive to Ukiah to find fresh flour. Most people don’t think of flour as perishable, but the difference between fresh-milled and conventional flour in terms of both flavor and nutrition is astonishing. To a grain-lover like Elizabeth, “it was like if you had to drive 200 miles whenever you wanted a good cup of coffee.”

Thankfully, Honore’s community saw the value in getting a little closer to their daily bread. Their kickstarter campaign reached 125% funding, and the mobile mill was able to take its first major trip in June, to the Episcopal General Convention in Austin. It’s also the centerpiece of Honoré’s “Wheat Wednesdays” educational program at underserved local schools. Their next project is a conference in May of 2019, which will gather farmers, millers, bakers, and church members together to build community through workshops, panels, and a planting day. (In a bit of spiritual kismet, the Growers Guild Conference will be held at the very retreat center where that fateful 2003 communion took place.) They’re also searching for land to create a home base for Honoré, which has been loosely based in and around Marin County thus far. Elizabeth envisions an educational farm for land-based healing ministry—simply touching organic matter is good for us, Elizabeth points out.

Spirituality and nutrition are singularly slippery topics that can be difficult to discuss. Trying to relate one to the other is an even more esoteric challenge. But listening to Elizabeth, it feels like the most natural thing in the world. She says the reception to Honoré’s work has been overwhelmingly positive (though she’ll admit a Dow Chemical executive’s wife walked out on one of her climate-focused sermons once). Not only that, but people seem to be more and more interested as time goes on: their booth at the general convention three years ago garnered mostly blank stares, but this year they were deluged with interest.

“I haven’t met very many farmers who don’t think farming is a very spiritual practice,” Elizabeth says. “And spiritually it’s so rich to be able to inhabit the life of scripture for a moment while you’re threshing or harvesting.” 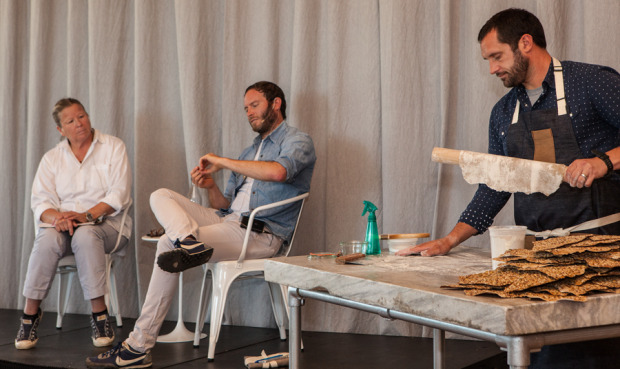 When Michael Pollan visited SHED earlier this year in support of his new book Cooked, he joked about the experience of shaking master baker Chad Robertson's hand. Michael hesitated to wash his own hands later, thinking that perhaps, just maybe, something magical and yeasty from Chad might have translated. Something he could use in his own bread to bring it even halfway to the greatness that the Tartine Bakery, which Chad co-owns with wife Elizabeth Pruitt, daily achieves.

But as became clear when Chad talked about his new book, Tartine No. 3, with our own Lora Zarubin at SHED on Sept. 14, 2014, it takes more than a mere handshake to glean some of his mojo. Chad is a man obsessed, a fermentation geek and a chemistry nerd whose experiments just happen to be delicious.

What he experiments with in No. 3 are whole grains. But he doesn't just do a straight trade with white flour recipes for its browner cousin. Rather, he deconstructs and then reassembles the very nature of bread's essence using many whole ancient grains which now rarely feed us. Moreover, he ferments. Anyone who proofs yeast engages in the fermentation process, but the secret to Tartine Bakery bread is in the length, the delirious lassitude, of the ferment. Chad regularly lets his loaves rise for 10 to 12 hours before baking.

Of course, certain grains have fallen out of favor for understandable reasons: they're difficult to bake with and require clever work-arounds to make edible, let alone delicious. Chad and his team — including head baker Richard Hart, who was onsite at SHED to assist — regularly make what they call "porridges" from "difficult" regional grains.

Inspired by René Redzepi's work with ancient Nordic grains for his world-renowned restaurant NOMA and emboldened by the superior team he had in the kitchen, Chad took his essential recipes and reimagined them for an older larder. One a pharaoh might recognize.

Remembering Chad as a "surfer/baker dude" in Pt. Reyes when he and wife Elizabeth first opened their Bay Village Breads Bakery out there over a decade ago, Lora asked Chad about the impetus of this newest cookbook, the third in his series emanating from Tartine Bakery's work.

"It started as another bread book and then went into pastries," Chad said. "I knew there was more we could do with whole grain pastries." He added, "I was getting slightly tired with the taste of white flour. I wanted to go back with my team and see what we could imagine, rather than just swappping out the white flour.

"We didn't go back to the drawing board," Chad stressed. "We went to our basic way of making breas and adjusted from that. We deconstructed it, trying different grains, particularly those without gluten, to incorporate into the breads. We made porridges and tried sprouting grains to discover new ways."

Chad discussed growing up in the French pain levain tradition and living in France with Elizabeth, who has gluten-intolerance, yet could eat the bread without distress. Broke and baking, bread is something they ate without cease. When they returned to the U.S., her discomfort and symptoms returned and she had to stop eating bread again.

"That was the 20-year question for me," Chad said. "Why could she eat bread there and not here?"

He came to understand that fermentation probably has a lot to do with it, meaning that the way bread is produced might indicate whether it will cause upset to someone who has difficulty processing gluten (unrelated to celiac disease). "We were already making bread that gluten-intolerant people could eat," Chad says. "We just didn't know it."

Heritage, ancient, whole grains have less gluten than the enriched white flour that forms the basis of most modern bread today. They're also extermely versatile, as Chad's team discovered during the year that they devised and tested recipes for the book.

"Our goals was to show the range of possibilities," Chad said. "We stopped at 10 recipes for porridge, for example, but we could have gone on and on."

Other questions included whether his bread is affected by place (not unless he's using local flour, in which case it adds its own terroir); if he prefers high-tech or wood-fired ovens (he loves them both for different reasons but misses working so much with fire); when his Tokyo store will open (mid-year, 2015); does fresh-milled flour affect the taste? (yes, it's like the difference between fresh ground pepper and a box of the dusty stuff from the store); does he collaborate with any farmers (he works closely with the Bread Lab at the University of Washington, which is experimenting with 40,000 different grain varieties); what's the best way to keep your sourdough starter alive when you're on vacation (either spread it out on a piece of parchment paper set on a cookie sheet and let it air dry while you're gone or take a small amount and add a lot of flour, until the consistency is like Play-Doh — that slows the starter down vastly and it can be reconstituted upon return); how to get airy bread (be careful with your preshape molding: the tighter you make the bread, the less air holes you'll get); and what he would do if he didn't bake (restaurant owners and trained chefs, he and Elizabeth would cook).

What should home bakers take away from the book, Lora asked.

"A lot of people don't know how to use amaranth or other grains that I've learned to work with," he said. "This is a way to incorporate these grains into your diet. There are other grains than wheat and they're very interesting and have their own unique qualities."

One of the ways that such decidedly non-sexy items as old grains become fashionable, Chad said, is to be championed by those bakers and chefs who want to use them, making it sensical for farmers to grow them, making them available to consumers to taste them.

"I'd like to help reposition old grains in a more stylish way," he said, "so that people choose to eat them and not just for the health reasons. Before, it was boring; there weren't a lot of choices.

"Now, we have hundreds of varieties of wheat to choose from."