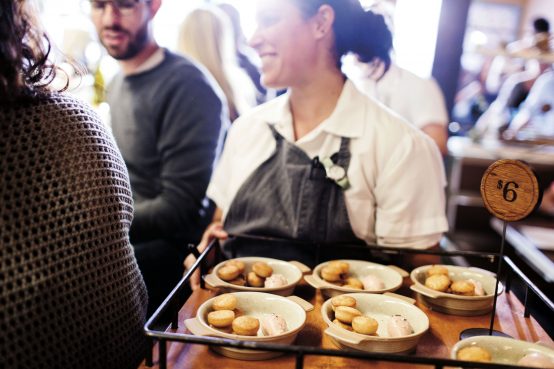 Fresh off the launch of their new book, chef-proprietors Stuart Brioza and Nicole Krasinski of State Bird Provisions will come to SHED to host The Best Cocktail Party Ever. Attendees will meet the authors and sample many different bites from the book paired with drinks from SHED’s fermentation bar while live music from the Dry Creek Duo rounds out the cocktail party of your dreams.

Select your ticket type at the right. The ticket with book option comes with a signed copy of State Bird Provisions, discounted from the cover price of $40.

Michelin-starred State Bird Provisions is a his husband-and-wife endeavor, with chef-proprietors Stuart Brioza and Nicole Krasinski the creative force behind the magical concept of delivering “provisions,” beautiful bites of modern California cuisine with an accent of Asia, at their San Francisco restaurant. Named Bon Appetit’s Best New Restaurant in America in 2012, few restaurants have taken the nation by storm in the way that State Bird Provisions has. Stuart and Nicole’s singular and original approach to cooking, which expertly blends seemingly disparate influences, flavors, and textures, is a style that has influenced other restaurants throughout the country and is beloved by diners, chefs, and critics alike. In the debut cookbook from this acclaimed restaurant, the chefs share recipes for their most popular dishes along with stunning photography, and inspire readers to craft an unforgettable meal of textures, temperatures, aromas, and colors that excite all of the senses.