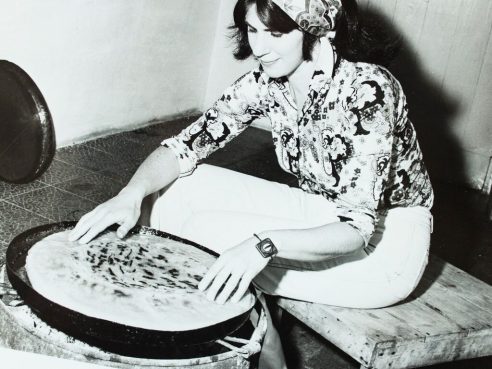 Join us in SHED’s Modern Grange for an unforgettable dinner with Paula Wolfert, the pioneering writer, cook, and teacher who explored and championed authentic regional cooking from Morocco to Europe to the Mediterranean. The special event will celebrate Paula and “Unforgettable: The Bold Flavors of Paula Wolfert’s Renegade Life,” the beautifully recorded new biography interwoven with recipes and photographs, just released by journalist Emily Kaiser Thelin.

The book recounts Paula’s incredible life and career and her exceptionally immersive approach to her research. Where most cookbook authors might spend an afternoon with a good cook to learn a recipe, Paula would practically move in. She would spend weeks in a country, staying to learn enough of the language to talk about the food and living with a local family. She introduced her readers to new flavors, techniques, and ingredients, many of which are commonplace today but were revolutionary in their time. Learn more about Paula in our post “The Unforgettable Paula Wolfert.”

The event will begin with a welcome reception with Paula and will be followed by a four-course meal prepared by Chef Perry Hoffman inspired by Paula’s recipes. The evening also includes a presentation by Paula’s biographer, Emily Kaiser Thelin, and by culinary photographer Eric Wolfinger, who shot the original images in the book.

All attendees will receive a copy of Unforgettable with their ticket purchase.

Vegetables in the Style of Laguiole

Paula Wolfert, a Sonoma resident, has authored nine cookbooks over her 50-year career, all considered classics. Her seminal work includes The Foods of Morocco, The Cooking of Southwest France, and five books on Mediterranean cuisine including the much praised Cooking of the Eastern Mediterranean. She has won the Julia Child Award three times, The James Beard Award five times, The M. F. K. Fisher Award, The Tastemaker Award and been a finalist for the British Andre Simon Award.

Emily Kaiser Thelin is a writer and editor based in Berkeley, California, a former restaurant cook and a two-time James Beard finalist. Her articles have appeared in the New York Times, San Francisco Chronicle, and Oprah, among other publications. For four years she was an editor at Food & Wine magazine, where she oversaw Wolfert’s Master Cook column.

Eric Wolfinger is a San Francisco-based photographer and former restaurant cook who brings a chef’s eye to his exceptional images. He has photographed such award-winning cookbooks as Corey Lee’s Benu, David Kinch’s Manresa, Gabrielle Hamilton’s Prune, and Chad Robertson’s Tartine Bread Book. Eric oversees the photography and videography for Unforgettable.