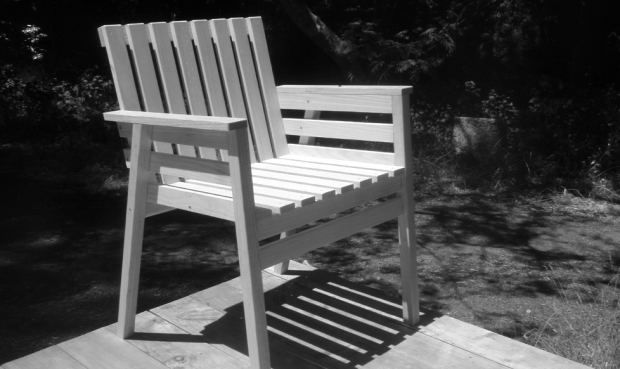 Many talented people are contributing to the creation of SHED, adding layers of ideas and artistry to the project. Scott Constable is a woodworker who uses his craft to explore the issues of everyday life, and chronicles his explorations in his blog deepcraft.org.  Scott has worked closely with us to design furnishings for SHED. As he writes here, Scott had a hand in more than just the furniture, and has helped shape our design direction from the beginning. Thank you Scott!

I think of the new line of furniture I designed for Shed as belonging to the same extended family. Consisting of just four unique pieces- a café chair, a barstool, a ‘community’ table and a multi-use, ‘demonstration’ table, the line evolved slowly over the past two years, or co-evolved, along with Cindy Daniel’s vision for Shed as a ‘modern grange’. Jensen Architects set the bar high by designing such an elegant building, whose pared down modernism manages to evoke agricultural vernacular without succumbing to nostalgia or rusticity.

I’m grateful that Cindy included me in early meetings with the architects as focus shifted to the building’s interior. Before actually designing anything, I had a hand in shaping a design direction, inspired by the region’s agricultural legacy and Healdsburg’s historic role as a major hub. My eyes turned to things like pallets, packing crates, fences and barns for inspiration, and I made a series of experiments and prototypes, leading eventually to a cogent formal language. The entire process was highly collaborative, a triangulation between the building itself and its built-in components, the functionality of the space, and the emerging ethos behind Shed’s product line and services.

My first breakthrough came with a concept for a massive table that would double as a method of curing wood I milled myself from locally-sourced ‘horticultural salvage’. A giant slab of unfinished sycamore would rest atop two stacks of neatly stickered wood, the weight of the slab ensuring the drying boards not warp. Each year, when the wood was adequately dry, it would be removed from under the table and made into something useful for Shed, either in the form of a limited production product for sale, or as an item for use in-house. The dry stack would be replaced with freshly milled boards and there would be a year to decide what to make with them. I love the idea of a table that also functions as a kind of ‘crowd source’ process piece that gives me an ongoing role as Shed develops over the years. To prototype the table, we milled a pecan tree and laid it up under the sycamore slab to dry over the past year. I’m now making pecan tabletops for the café, and the remainder is being made into small serving platters.

The first iteration of my Demonstration Table, set up to dry a load of pecan wood.

The Café Chair developed next from a structural experiment. I had an overstock of vertical grain Douglas Fir lathe I had been making into stickers for drying wood, dimensioned rough at about 1” x 2”. The lathe is milled nearby in Cazadero, sold as offcuts from making dimensioned lumber, so it’s very inexpensive despite its straight, clear grain. I thought it would be a great challenge to make a comfortable dining chair using only lathe and a single fastening system; it would also be in keeping with the Modernist Farmer character I had invented. The experiment mostly worked, producing a reasonably strong, somewhat comfortable chair, but it needed tweaking. I abandoned the narrow parameters of using just 1 x 2 lathe, but kept the basic form, dimensioning structural parts for greater load bearing, and seat and backrest parts for greater flexibility and comfort. I made the next prototype in ash to complement the barstool. The new chair retains its airy permeability and still evokes the homemade-modernist paradigm, but also meets the requirements of comfort and durability. With its slat construction, exposed screws and whitewash finish, the chair shares elements with the barstool while exerting its own personality. The two are obviously related, but don’t match at the expense of their individuality.

By now I knew where the furnishings would be in the space, how they would interrelate and what would surround them. I just needed to design a very long Community Table for the center of the dining area, and it needed to anchor the collection and choreograph movement through the space. Because the 15’ 6” long table would be shared by people who did not necessarily know one another, I wanted to imply that it could be infinitely long, a table for everyone to gather round. I also wanted the table itself to be extremely minimal in order to draw attention to the food and the collection of people and how they naturally compose themselves. Knowing that Cindy was keen on using backless stools for seating, I also wanted the table to appear to be floating, to be as unobtrusive as possible, a meeting place more than an imposing thing. I pictured two identical boards running parallel to each other, separated by a narrow gap, allowing air to circulate through the middle of the table, unobstructed. I decided to make the boards of glued laminations of white ash, cut from full-length stock so there would be no seams. The boards are mounted on a base of three X-trestles made of 3” square tube, welded together and hot-dip galvanized, like farm equipment or fencing. At 33” wide the table invites intimacy while allowing more room for circulation around the space. I’m very proud of the Community Table and am excited that Cindy will be offering shorter versions for sale through Shed on a commission basis.

I assembled the Shed Community table outside my studio for a trial fit.

Working with Cindy and designing these furnishings for Shed over the past few years have been among the most challenging and rewarding endeavors of my career. We share a deep philosophical alignment and I’m truly honored to have been part of bringing Shed into being. I’m confident Shed will become a vital mainstay of the community and a major destination in Sonoma County. 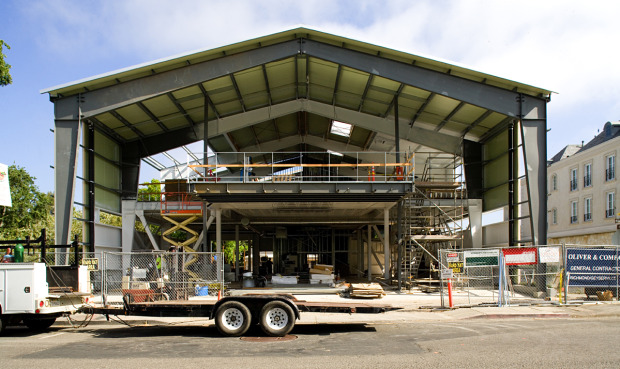 Doug and I are putting a lot of time and love into the building.  Our vision is becoming a reality with each flash of a weld and swing of a hammer.  I visit every day, pink hard hat on head.

The mechanical, plumbing and electrical work has advanced, and we are putting equipment in place.  On the ground floor we installed our wood-burning oven and two cold storage walk-ins (one windowed for SHED’s prepared food).

We designed the space for maximum flexibility.  By sliding a barn door, we can open SHED’s kitchen for observation and classes.  We have indoor/outdoor venues:  sitting room, balcony, terrace, theater.  We will tie events to the season and our region.  Although we expect to occupy our building in December, events will begin a few months later in February.

Standing in the center of the second floor on my daily visit, I look to the west over Foss Creek and see the historic Cerri Building, an old, metal fruit-packing shed.  To the south I see today’s Healdsburg with its rose garden, green commons and the creek’s restored riparian habitat.  This is exactly where we want SHED to be – at the confluence of the past and present, bringing tools, tastes and traditions to our community.

I like to imagine people here: enjoying café breakfast on the deck, relaxing with an afternoon snack, thumbing through our vegetable seed offerings, feeling the heft of a cast iron skillet, choosing flowers and food to take home…

To the West, over Foss Creek to the historic Cerri Building. 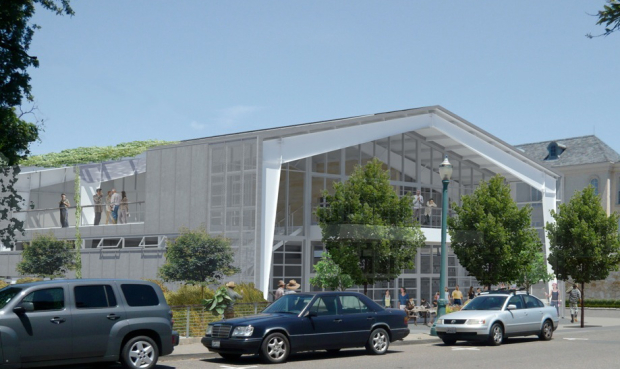 After months of careful site preparation, local workmen are skillfully assembling the bones on the building – clipping and bolting the rigid frame and roof supports.  Following two years of planning and designing, SHED is taking shape on North Street.

Until now, SHED has been a dream and an attractive architectural rendering.  Now, we can vividly picture the front terrace, the coffee bar at the main entrance, café seating near the creek, and the pantry & larder (sources for eat-in and take-home food).  With the beams in place, it is easy to imagine the second floor with the 1400 square foot gallery for meetings, classes, film, and performances.

We have worked closely with the San Francisco-based firm, Jensen Architects, to design a building that thoughtfully addresses the constraints, as well as the opportunities, of our site.  As a modern interpretation of the traditional barn or shed, our building references some of Healdsburg’s agricultural buildings, including the Cerri Building, the old prune packing shed across the creek.

Sustainability is central to our design, which incorporates a resource-efficient, prefabricated metal structure, thermally-efficient insulated metal cladding, photovoltaic cells on the roof, and a naturally ventilated interior. Glazed garage doors on two levels open the interior to the outdoors, connecting to the street life in front, and to the restored creek-side riparian habitat along the building’s west facade.

Our hands-on, full service construction company, Oliver & Co, is working with a crew of local sub-contractors.  It has been amazing to watch SHED come together like a giant erector set, over the last few days.

There are so many components critical to a successful project.  We deeply value the close working relationships with Jensen Architects in the conceptualization of SHED, and with Oliver & Company in the construction process.  Their experience, attention to detail, and quality workmanship are, well, how SHED happens.

As SHED happens, see the progress on our SHEDcam.