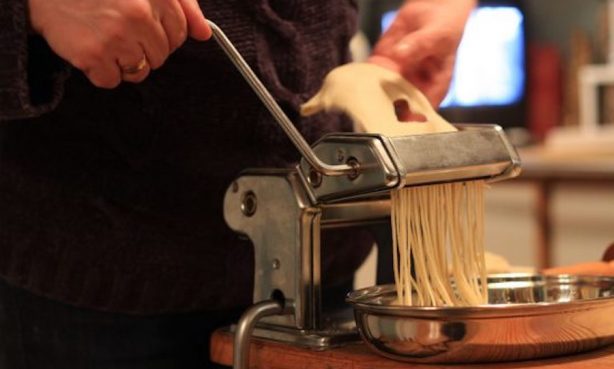 When necessary, flour and water make paste. When inspired, they make pasta. And when the flour is semolina, all that is needed for transformation is an emphasis on less. Scarsa — scant — is the word to remember.

This is how it’s done:

Mound two cups of semolina flour like a small temple onto a clean cutting board.

Slowly add tiny amounts from one cup of still water, incorporating it into the flour as you go. The dough should hold together just barely.

For ease, break the mixture into two balls. Knead each one, intent on getting the water from the dough, using the base of your palm to press it out, for less than five minutes.

The dough will have a velvety texture, with the sand-like roughness of the flour resolved. There should still be water in the measuring cup.

Wrap each ball in plastic and let rest at least 30 minutes in the refrigerator. (Cue the wine.)

Remove pasta balls from the fridge and, using a knife, slice each into several circles.

If using a hand-cranked pasta machine, set it at zero and crank each slice of dough through, advancing to numbers two, four, six, and eight, cranking the same piece of dough through until it is as thin as you desire. You may have to cut the dough into lengths as it elongates. Go ahead and do that.

Change the setting on your pasta machine to cut fettuccine or another pasta shape of choice. Run each length through to create your desired shape.

Let the cut pasta dry in a rack or on a floured baking sheet for at least 30 minutes.

Prepare a pot of water as salty as the sea and set to boil.

Once at a rolling boil, add your noodles. Cook three minutes or less; it should be al dente, toothsome to the mouth.

Reserve some of the pasta water to thin your sauce if you like, and drain.

Prepare to receive all kinds of uncanny accolades. Chuckle to yourself gently. It’s just flour and water. And: less. Scarsa!

This entry was posted in Eat Good Food and tagged pasta, recipe, semolina.