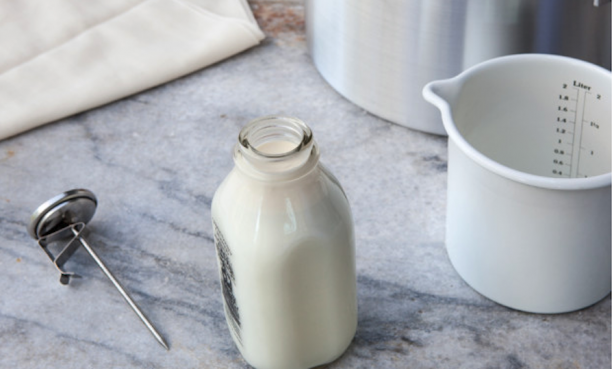 Yogurt is downright magical. It’s packed with protein and with gut-friendly bacteria that aid in digestion. It goes from sweet to savory, from breakfast to dinner, like nobody’s business, and it stays fresh far longer than a carton of milk. Making your own batch of yogurt feels pretty magical too, and is simple to boot—all it takes is a quart of milk and a spoonful of yogurt.

Yes, you read that right—you need yogurt to make yogurt. Yogurt is the product of live bacterial cultures fermenting milk, and for your first batch you’ll need to borrow some of those cultures from a good storebought yogurt. Once you’ve had your first yogurt-making session you can save some of your homemade yogurt to inoculate the next batch, much like maintaining a sourdough starter or a kombucha mother.

Homemade yogurt without stabilizers or thickeners has a thinner texture than you might be used to—it will dribble, rather than dollop. If you prefer a thicker yogurt, strain your yogurt through a cheesecloth-lined colander for a few hours.

Put milk in a heavy pot over medium-high heat. Heat, stirring frequently until milk reaches a bare simmer. Milk should be between 180 and 200 degrees. Remove pot from heat and let cool to between 110 and 120 degrees.

Place yogurt in a small bowl and whisk in a bit of milk until smooth and liquidy. Stir the yogurt mixture into the pot of warm milk and cover with a lid. Wrap pot in a large towel and place in a warm place, such as in the oven with the light turned on or on top of the refrigerator. Let yogurt sit for 6-12 hours until thickened. The longer it sits, the tangier it will be.

At the end of fermentation, whisk the yogurt vigorously until smooth. Keep finished yogurt in the refrigerator, and be sure to save some for the next batch.