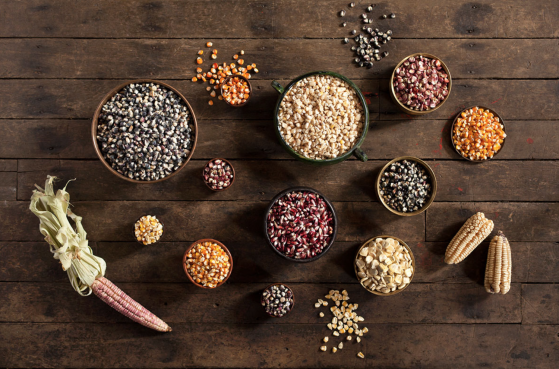 Corn has been a staple in the region now known as Mexico for some 11,000 years. It is more than a foodstuff; it is an entire way of life.

And, as with so much else in the modern world, it is a way of life that is dramatically changing.

Once home to some 60 so-called landrace corn varieties, that is — corn grown and adapted to particular areas and climates — Mexico has slowly Americanized its fields, favoring just a few varieties over the variations the elders once valued so highly.

Where corn once flourished in every state, it is now mostly grown in just three. Even NAFTA plays a role, introducing inexpensive American yellow corn to which consumers quickly adapted, abandoning the indigenous varieties with which they grew up.

With that eclipse in choice, so comes a change in taste and manner, and ultimately — a change in health, resulting in the diabetes and heart disease that marks the Western diet.

In addition to the impact on citizens’ health, losing heirloom varieties means losing taste. The taste that past generations knew, a taste that informed family recipes which no longer have the same flavor. Lore and knowledge have gone, too.

Several crusaders are working to restore Mexico’s rich maize legacy, including Rafael Mier, who has founded the nonprofit Organización de Tortilla de Maíz Mexican to educate his fellow countrymen about how to make more delicious tortillas.

The secret? Start with more delicious corn. Even in Mexico, most tortillas are made with water and a powdered mix called masa harina. The difference is like a pancake-mix pancake versus one made from scratch with freshly ground flour: Alike in name only.

Mier is an unlikely crusader, a businessman who one day three years ago thought to grow his own popcorn only to discover that there was no seed available near him. Nor was there any for sale the next state over. And so on. A simple desire to have freshly popped corn to snack on has led him to devote himself full-time to his nonprofit and resign his role as CFO to a business.

Thank goodness for that. Because corn is an endangered commodity in Mexico, home to the Mayan culture which believed that man was created of corn.

We grind heirloom corn at our Healdsburg store and purvey fresh polenta and cornmeal from it. We carry handsome, locally-made oak and walnut tortilla presses. We’ve invited restaurateur Natalie Goble to join us this month to demonstrate the easy art of making fresh masa. We’re interested in corn and preserving its important role in Western life. We hope that, the more you know, the more interested you will be, too. A very culture depends on it.

This entry was posted in Farming, Field Notes and tagged corn, mexico. The Art of Mexican Cooking