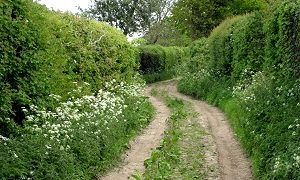 What do healthy soil and hedgerows have to do with climate change? Perhaps much more than you’d suspect.

While healthy soil retains water and enhances the flavor and nutrition content of food, it also critically increases a farm’s ability to draw down carbon dioxide and thus mitigate global warming.

On our HomeFarm, we work to maximize soil health by planting no-till cover crops, making our own compost to add fertility, and integrating perennial crops and trees. This fall, we are enhancing our hedgerows as another way to reduce our carbon foodprint.

“Hedgerow” is an old English term that refers to mixed plantings of trees, shrubs, grasses, perennials, and ground covers that grow along field borders, fence lines, and waterways.

In times past, hedgerows were considered essential for marking ownership boundaries, and for keeping livestock in or out of the fields. Those particular reasons for planting hedgerows aren’t as relevant now, but they can provide many benefits which are vital for the future health of our planet.

Hedgerows not only serve as habitat for beneficial insects, pollinators, and other wildlife, bringing diversity and beauty to the farm, they also help build soil and and conserve water in the following ways:

Among their other bonuses, hedgerows are demonstrably useful in sequestering carbon. Here’s how it works: when plants take in carbon dioxide from the atmosphere through the process of photosynthesis, the carbon dioxide is broken down, allowing the carbon to become part of the plant’s tissue. As plants die or shed tissue, either through natural processes or pruning, the carbon that was stored in the plants breaks down and enters the soil.

With all this in mind, planting hedgerows is a good way to add to the organic composition of our soils and increase water conservation, and most importantly, to contribute to the carbon offset of our modern, carbon-heavy lifestyles.

For more on how to plan, prepare, and plant hedgerows, we recommend Hedgerows for California Agriculture: A Resource Guide produced by the Community Alliance with Family Farmers (CAFF).

This entry was posted in Grow Your Own. Growing a Revolution: Bringing our Soil Back To Life