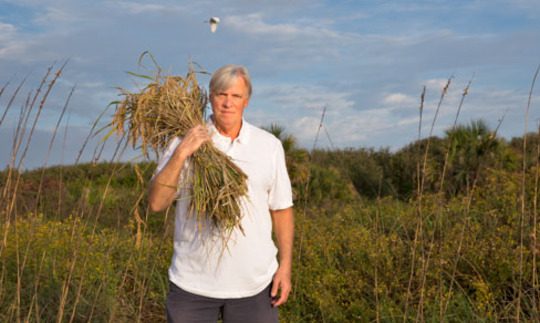 Back in the ’90s, entrepreneur Glenn Roberts would drive South Carolina’s backroads slowly, scanning the fields for stands of heirloom corn. It was dicey stuff to track, grown by generations of bootleggers who were afraid that buying corn seed would alert the revenue man to their moonshine. They had to save their own seeds or get caught.

Through that unlikely confluence of larceny and luck, some of the South’s original grains of the South have survived, and Roberts developed a gimlet eye for them.

According to John T. Edge’s new book, The Potlikker Papers, Roberts kept a camp stove in his car and, when he spotted a likely field, would pull over, crack an ear from a stalk, and boil it right there on the side of the road, looking for the best grain for his grits.

Famous for his knowledge of antebellum foodways, Roberts had a successful architectural restoration business before he chucked it all to establish a milling business devoted to the best possible practices.

According to Edge, Roberts “rented a derelict metal building behind a Columbia car wash, installed granite mill stones that looked like set pieces from a stage production of The Canterbury Tales, and accessorized them with a Rube Goldberg assemblage of sleeves and spouts to sift and sort his grain products. To ensure that the fragile flavors of the milled corn were not muted by the humid local climate, he ground in an oxygen-free environment and shipped products the same day they ere packed. After discovering archival evidence of an antebellum yellow dent [corn] that was milled frozen, he began freezing his corn before he ground it.”

This passion drew Thomas Keller and Alice Waters, Charlie Trotter and other white tablecloth chefs from around the country to Roberts. And that’s when he knew that if he could sell them his grits, he could probably save rice, too.

Hugely educated, able to discuss 18th century Venetian farming practices as easily as the vagaries of the classical French horn, Roberts longed to produce meals that tasted like food did one or two centuries before. He quickly became an expert in the practices and ideas found in food history, but he couldn’t find the taste.

Having ordered heritage Carolina Gold rice for a dinner party, Roberts was dismayed to discover it lousy with weevils. Picking the insects from the bag, he vowed to resurrect the grain.

Naturally, he quite literally began in his own backyard, growing small plots of Carolina Gold and working with a geneticist to develop a hale version that could tolerate modern days stressors.

According to his own biography, the corn and other grains that he eventually developed were secondary, chosen to support his obsession with the rice.

“At this point,” his biography states, “Glenn possessed a fully realized, madly ambitious plan: to make Carolina Gold rice a viable Southern crop, and to grow, harvest, and mill other nearly extinct varieties of heirloom corn and wheat organically. By doing this, Glenn hoped to re-create ingredients of the Antebellum Southern larder, ingredients that had vanished over time. Grits, cornmeal, Carolina Gold rice, graham and biscuit flour—these ingredients, all milled fresh daily for the table, had helped create a celebrated regional cuisine and America’s first cuisine: the Carolina Rice Kitchen.”

He lived in his car. He sold everything else. By early aughts, he had his first successful harvest of Carolina Gold rice, had established his flourishing Anson Mills business, and had even married the New York Times stringer who had come to interview him about it all.

Learn how to cook Carolina Gold rice in this no-fuss recipe from Anson Mills.

This entry was posted in Meet the Makers. The Gift of Southern Cooking