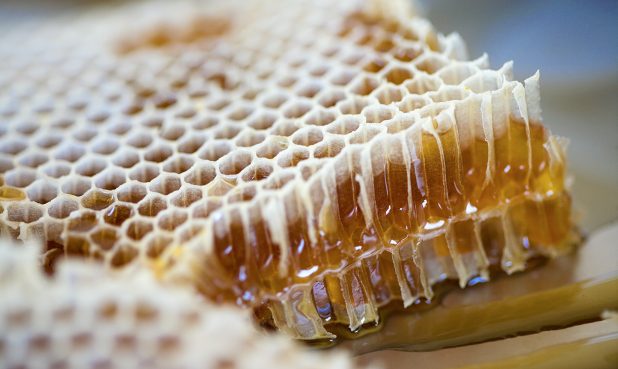 The wonderful gifts of honey and honeycomb have uses are as long and varied as human existence.

From stirring chopped honeycomb into yogurt or ice cream to drizzling raw honey collected by our apiarist DeWitt Barker atop pancakes and waffles, there’s almost no way we don’t like to eat it.

Read on to learn more about how honey is produced, along with the history and uses of this precious gift from bees.

Nutritional Information
Honey is composed of mostly fructose and glucose, with a small amount of sucrose and other carbohydrates. While honey has been anecdotally reported to lessen symptoms in people with seasonal allergies, these results have not been consistently duplicated in clinical studies. Hydrogen peroxide, naturally present in honey, is partially responsible for its antimicrobial properties.

There are many supermarket honeys that have been adulterated with additives and are not 100% pure honey, so it’s best to procure your honey from a local beekeeper or known source.
Pure creamed honey is made by mixing crystalized honey that has been powdered into fine granules with liquid honey.

Store honey in a cool, dark place indefinitely. If it becomes crystallized, heat briefly in a glass container in a pot of warm water.

This entry was posted in Eat Good Food and tagged bee, honey, honeycomb.