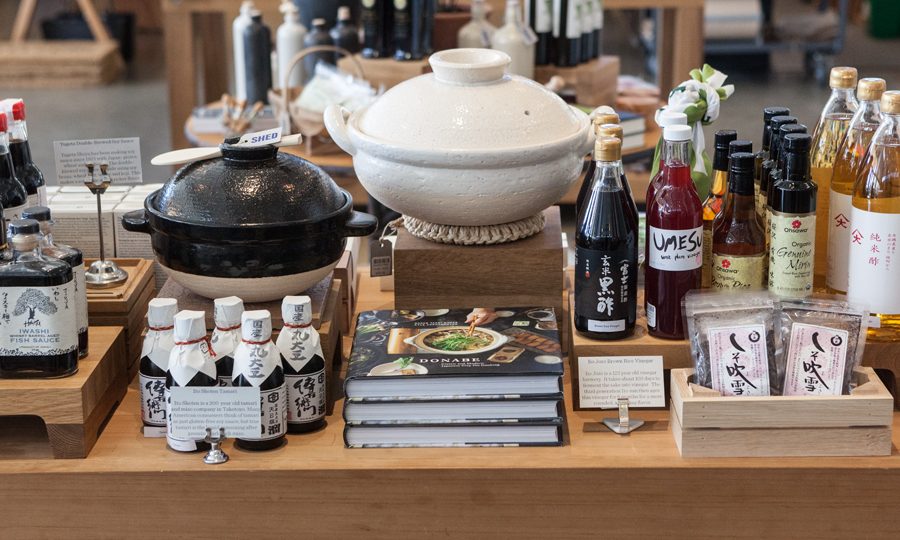 From beautiful and elevated kaiseki cuisine to simple yakitori, the core philosophy for serious cooks has long remained the same: coaxing the best flavor out of high-quality seasonal ingredients.

Since opening our store in April 2013 with a selection of donabes (Japanese clay cooking pots), we have dedicated ourselves to exploring the world of Japanese cookery, while expanding our offering of high quality Japanese pantry essentials.

Many of our products are sourced directly from an eighth generation dashi shop in Tokyo, Yagicho-Honten, as well as other Japanese producers with histories of careful craftsmanship, pristine ingredients, and respect for tradition.

Building on our post Umami in the Japanese Pantry, here is our selection of essential ingredients and some of the the products we offer from our favorite artisan producers.

We source donko (high-grade log-grown) mushrooms from Yagicho-Honten for their superior aroma, flavor, and texture.

KATSUOBUSHI (SHAVED DRIED BONITO FLAKES)
Dried, smoked, and fermented skipjack loin that has been shaved, the papery, pinkish-brown flakes known as katsuobushi, or bonito, are just as essential to dashi as kombu. The slightly smoky, fragrant flakes are also used as a topping on such hot dishes as fried tofu, where they’ll flutter as if alive, or added to cold dishes for a bit of texture and aroma.

KOJI
A type of mold, koji is a live culture traditionally used in a wide variety of Japanese foods such as soy sauce, mirin, miso, and sake. Grains are inoculated with koji in order to start fermentation, the most common form being rice koji.

Shio-koji (rice koji with salt), used as an all-purpose seasoning, works wonders in any style of cooking, as a marinade to tenderize chicken or fish, or as an ingredient to flavor sauces.

Shio koji, made by Aedan Foods in San Francisco, is available in our Larder cooler.

MIRIN
A sweet cooking wine made by fermenting steamed glutinous rice with shochu (a Japanese distilled spirit), mirin adds sweetness and a subtle sake-like flavor to sauces and glazes.

MISO
A fermented paste made from soybeans, koji, and salt, miso is one of the most important traditional staples in Japanese cooking. Cooked soybeans are mashed and fermented with salt and koji before being aged.

There are many types of miso. The brand we carry at SHED is made in San Francisco by Aedan Foods, and is available in our Larder cooler.

RICE
Rice (kome when uncooked; gohan when cooked) is the staple grain of Japanese cooking and is included in most meals. Short-grained, sticky rice is the most widely consumed.

RICE VINEGAR
An essential seasoning in Japanese cuisine, rice vinegar is a fermented product made from rice, koji, and water. Japanese rice vinegar tends to be pale in color, and is much less acidic than Western vinegars.

• White Rice Vinegar
This pure white-rice vinegar is made from house-brewed sake using local, organic rice. The company has been using the same seed vinegar recipe since 1930. It is made in Aya, a town in the Miyazaki Prefecture known for its water, lush laurel forests, and organic agriculture.

• Brown Rice Vinegar
Iio Jozo is a 123 year old vinegar brewery located just outside the seaside town of Miyazu. To make brown rice vinegar, Iio Jozo uses approximately equal parts sake, water and vinegar mother. It takes about 100 days to ferment the sake into vinegar, which is then aged 8 months for a more rounded, appealing flavor.

Wadaman Co., Ltd. is located in Osaka and has been a sesame manufacturer for more than 130 years. With a light golden color, their organic golden sesame oil has a fresh roasted nutty quality; the organic black sesame oil has the thick aroma of freshly ground almonds, cacao, and sesame.

SEAWEED
As a mountainous island nation with a relatively small landmass for growing food, Japan has traditionally harvested and dried many types of sea vegetables. Here are some of the seaweeds important to Japanese cuisine.

Large, intact pieces are only found in specialty shops such as Yagicho-Honten. Our rishiri and hidaka kombus are harvested in the Rishiri and Rausu peninsulas of Hokkaido.

• Nori
A seaweed that is widely used in Japanese cuisine as a seasoning and to wrap rice balls and sushi. Varieties include yaki nori (dry-roasted), ajitsuke nori (seasoned and roasted) and tsukudani nori (wet-seasoned).

• Wakame
Wakame is one of the most popular and common seaweeds used in Japanese cooking. Most often sold either salted or dried, the long, slippery leaves are reconstituted in water or broth and often eaten in soups (such as miso) or salads.

SHOYU (SOY SAUCE)
Also called shoyu, soy sauce is the most important condiment and seasoning in Japanese cooking. Brewed from soybeans, wheat, water, and salt, and aged for a few months to several years, the best-flavored soy sauces have no additives and should be kept refrigerated.

We offer several types of shoyu at SHED:
• Yugeta Shoyu has been making double-brewed soy sauce since 1923 just outside Tokyo. It is naturally brewed using only Japan-grown wheat and soybeans.

• Sakura Cherry Blossom Shoyu is made in Kyoto with white shoyu that has been infused with preserved cherry blossoms. Aged for one year, the delicate flavor is perfect for marinating or topping sashimi.

• Black Garlic Shoyu, also made in Kyoto, follows traditions dating back 3,000 years, while introducing new ingredients to produce an exceptional product. With tasting notes of fig, raisin, molasses, and fermented garlic, this shoyu can stand alone for finishing dishes, or add earthy flavor to vegetable stir fries and vinaigrettes.

SPICES AND FLAVORINGS
Furikake
A savory and salty Japanese seasoning used to enliven rice, furikake is typically a dry mixture of ingredients such as dried fish, sesame seeds and seaweed. It can be used in Japanese cooking for pickling foods and for onigiri (rice balls). We source a sesame furikake that has been soaked and dried in three flavors – yuzu, plum, and wasabi – from Yagicho-Honten.

Shichimi Togarashi
Shichimi togarashi is a Japanese spice mixture, dating back to the 17th century. A blend of orange zest, black sesame, sesame, poppy seeds, Szechuan pepper, chili flake, nori, and citric acid it is used to enhance the flavor of noodles, grilled meats, udon, and vegetables. We love playing with this “common” spice in unexpected ways. Try sprinkling some on top of avocado toast, ahi tuna, or use as a finishing pepper on a tangy, soft goat cheese.

Shiso (Perilla)
A unique, citrusy, peppery, minty herb that is one of the most commonly used in Japanese cooking, shiso is both red and green. The red is commonly used to flavor and color pickles, like umeboshi, or pickled plums and is a component of our SHED Shiso Salt. The green leaf is used to season and garnish many dishes, such as sushi and sashimi, tempura, salads, and noodles.

UMEBOSHI
Sweet, sour, and supremely salty, umeboshi (fermented plums) are a staple of Japanese diets. Whether eaten whole or ground into paste, the umami-rich umeboshi lend complexity and oomph to rice dishes eaten throughout the day.

UME (PLUM) VINEGAR
Umeboshi vinegar (also called ume plum vinegar) is the by-product of the umeboshi-making process. Traditionally the ume are dried and then preserved in a salt brine with purple perilla (shiso) leaves that add a bright red color. The ume fruits are pressed and the liquid that results is bottled up for use as a condiment. The vinegar is very salty, with a sour, fruity flavor.

At SHED, we offer Yume Boshi from California. This red plum vinegar is perfect for sprinkling on steamed vegetables or for use in salad dressings.

We’ll be adding to our roster as new essentials become available. Did we miss any of your favorites? Let us know in the comments!