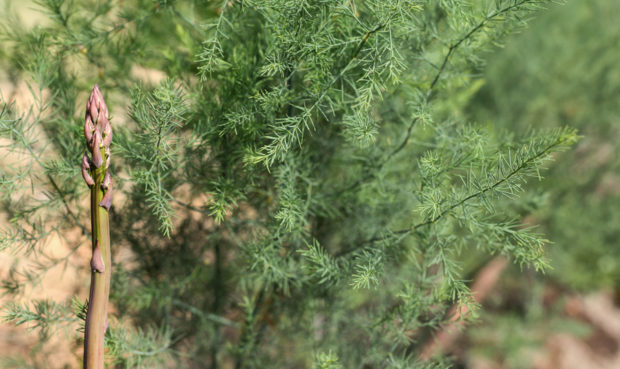 With your high summer garden in full flourish, it may seem odd to consider adding more plants, but planting perennials guarantees fresh vegetables for the seasons ahead.

Unlike those annuals that need to be started from seed each year, perennials are edible roots, shoots, leaves, flowers, or fruits that produce year after year once they’re established in suitable sites and climates.

Perennial vegetables are well-suited for low-maintenance gardening and can also help improve the quality of your soil. They don’t need to be tilled, so they keep the mycelial culture and soil structure intact; they increase aeration and water absorption; and their natural decomposition cycles as they drop leaves and die back every year creates a natural compost and topsoil.

Here are nine perennial vegetables, some you can plant in the fall depending on where you live.

Asparagus: This slender spring beauty is probably the best-known perennial vegetable, and one of the most coveted early spring vegetables. Unlike many annual vegetables, it’s not a quick producer, but asparagus provide tasty green treats every year once established. Hardiness zones 3-8.

Horseradish: This perennial plant from the mustard family is a must-grow for those who love spice and sushi. Horseradish’s leaves are edible and its strongly flavored root can bring one to tears.

In some areas, horseradish can take over the garden with its invasive roots, so when harvesting them in the fall  you can remove as much of the root as you like, replanting only what you will need for next year. Hardiness zones 4-8.

Lovage: Very similar to celery, the young leaves and stems of this six-foot-tall perennial are delicious in springtime soups. The seeds and roots are also edible, and its umbel flowers attract beneficial insects. Lovage thrives in average garden soil, in sun or partial shade. Hardiness zones 4-8.

Malabar Spinach:  Native to Africa and Southwest India, this climbing vine spinach is a staple food throughout tropical Asia and Africa, and with good cause: it’s high in protein, calcium, iron, and grows like crazy. The vine will grow 8-14 ft and is thrives best in full sun on a trellis in fertile, well-drained soil. Extremely frost tender. Hardiness zones 7 and higher.

Rhubarb: This perennial vegetable is not only edible, but is also a colorful addition to the garden, its stalks vibrant in varieties of red, pink, and green.

Rhubarb is best planted from a crown, which can be acquired from your favorite nursery or garden center, and should be allowed to grow for several years before harvesting the stalks for that perennial summer favorite, strawberry rhubarb pie. Only the stalks of the rhubarb are edible; the leaves, which are toxic to humans, make a great addition to the compost pile. Remember: rhubarb leaves are poisonous. Hardy to all zones.

Sea Kale: Sometimes grown as an ornamental, this coastal native bears gray-blue leaves and white flowers on three-foot-tall plants. Cover the plants in spring and harvest the blanched, hazelnut-flavored shoots when they are about six inches tall. The young leaves and flowers are edible, too. Plant seeds in moist, well-drained soil in full sun. Hardiness zones 4-9.

Sunchokes: Also known as Jerusalem artichokes, sunchokes are a relative of sunflowers that produce a crisp and sweet edible tuber. This perennial vegetable can be eaten raw or cooked as you would a potato, and is often described as having a nutty flavor.

The sunchoke plant itself can grow rather tall, as a sunflower does, so it’s well suited to planting as a border or along an edge of the garden. The tubers are harvested in the fall, with some of them left in the ground (or replanted after harvesting) for next year’s plants. Hardiness zones 4-9.

Tree Collards: A truly remarkable plant, Tree Collards are a highly productive Brassica which produce delicious blue-green leaves that taste quite similar to annual collards. They are especially sweet during the cool times of the year. While their exact origin is shrouded in mystery, they are reputed to come from Africa, and have been propagated and passed on within African American communities in this country. They can thrive happily for 10-12 years before needing to be re-propagated by cuttings to continue. The plants grow five to six feet tall and can sprawl six to eight feet in all directions. They need full sun and rich, moist soil. Hardiness zones 7-10.

Yacon: A staple crop to the indigenous people of the Peruvian Andes, this handsome plant grows edible tubers on a root system, much the same as the way potatoes grow. The flavor is fresh, crisp, and juicy, and mildly sweet like a cross between an apple and a melon. They’re delicious peeled and eaten fresh, or shredded into a slaw. You can also cook the tubers down to make a sweet syrup.

Yacon grows in zones 9-11, though other regions may be able to grow them with a little more care.

You can find yacon seeds online, but it’s easiest to grow them from rhizomes. Plant them in moist, rich soil, about two inches deep. Keep the soil moist and warm until its first leaves appear, then water when the top of the soil gets dry. Yacon loves full sun and thrives in warmer weather.

This entry was posted in Grow Your Own and tagged perennials, planting.