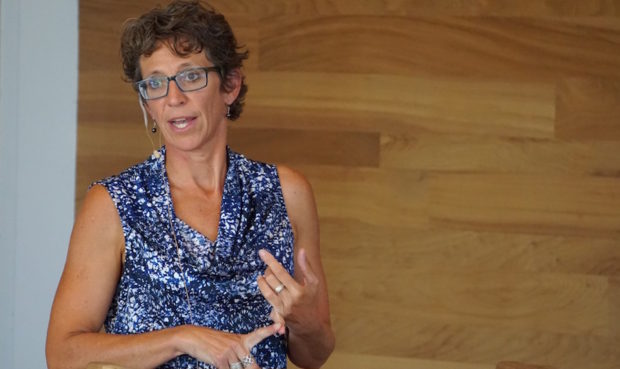 The Climate Smart panel we have slated for next Wednesday, July 20, focuses on a topic dear to SHED’s founding ethos: Good farming.

How are best practices in food production tied to the climate? Like everything is tied to climate. And by that we mean: Everything.

The more one looks into it, the more the web connecting all the different pieces of the environment — both natural and human-made — comes into relief.

Renata Brillinger has spent her career making, watching, and perhaps most of all — pointing out — those connections. The executive director of the California Climate & Agriculture Network (CalCAN), Brillinger’s passion is helping all citizens to understand how their actions are connected to air, water, food, and land — the essentials of life.

For the forthcoming SHED event, Brillinger has convened a coalition of private and public stakeholders to discuss how agriculture impacts climate and how government impacts agriculture. It’s a neat little web of its own.

“CalCAN works on state level but there’s a lot going on here in Sonoma County on the topic of climate change in agriculture and that trickles both ways,” Brillinger says. “It trickles up to the state level and the policies on the state level have had impact back here in the county.”

She adds, “And the two elected officials who will be attending are good champions on this topic.”

Representing the state of California, senator Mike McGuire and assembly member Jim Wood will be present to discuss allocations and the messy work of the Capital.

The California Global Warming Solutions Act passed in 2006 stipulates monies be used to move California into a cannier climate controlled future, and while Governor Brown passed billions of dollars of aid to that end in the most recent California budget, the state Assembly has so far declined to act on it.

Of particular interest to CalCAN is the Healthy Soils Initiative, which could be funded for $20 million if the legislature passes it. If accepted, this initiative would establish protocols, education, and staffing to replenish California’s direly degraded soil and help to build new topsoil, among other projects.

“There’s no time to waste,” Brillinger says. “We have a climate crisis. It’s a political matter and a hard set of decisions that a varying group of legislators have to make.”

She adds, “McGuire and Wood are both up-and-coming leaders and hopefully will have some influence in advocating for agricultural allocations of this money.”

Joining the elected officials for the panel are Josh Prigge of Fetzer/Bonterra Vineyards; Mike Griffin of Organic Valley; Valerie Minton of the Sonoma Resource Conservation District; and Karen Gaffney from the Sonoma County Agricultural Preservation and Open Space District.

“All of these people have real boots on the ground,” Brillinger says. “They’re actually implementing practices. The policy doesn’t just float out there by itself. It does have real manifestation and hopefully, everyone who’s there will tell a story about how they see their particular expertise or focus benefiting from an investment that the state will make.”

Brillinger hopes that even those lay people who strive to pay attention to climate and agricultural issues may learn something new at the panel. It’s certain that we’ll all come away with a better understanding of how it’s all connected.

“This is a relatively new conversation for people to understand,” Brillinger says. “That cover crops actually store carbon. Maybe they haven’t thought about how conserving water protects our climate. Or how, if we minimize sprawl, that helps to conserve resources.

“The climate crisis gives us an opportunity to solve a whole bunch of problems at once,” she continues. “Climate solutions in agriculture bring numerous other benefits. I could give a whole laundry list: Cleaner air, water, economic health, public health, and on and on and on.”

Illuminating the connections among growers, producers, ranchers, and ordinary citizens helps us all to do a better job stewarding our world. This panel is just one thread in a larger weave.

“We don’t often do regional events like this,” Brillinger says. “This will be a good showcase for a conversation about how the state funding and programs work together.”

The Climate Smart Agriculture Panel convenes next Wednesday, July 20, from 6:30-8:30pm in our upstairs Grange. Admission is free.