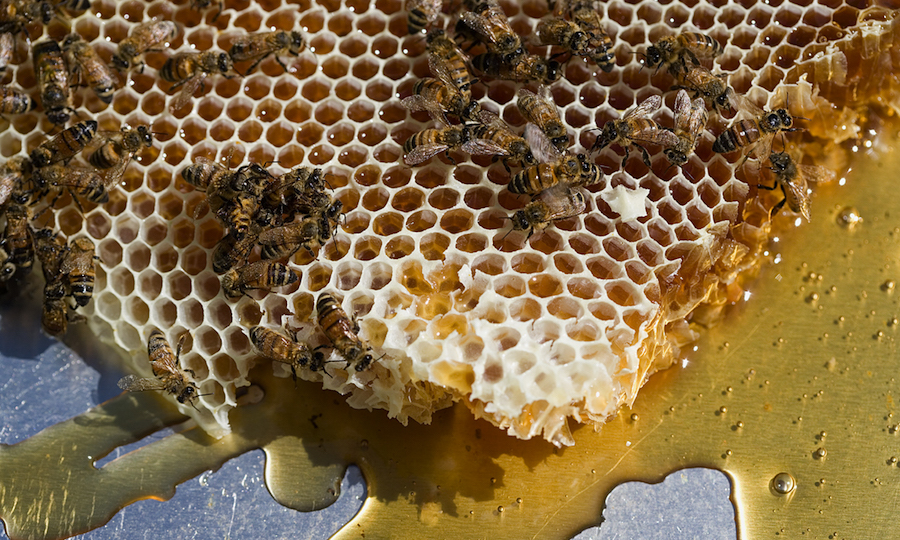 What drives a man to abandon an ordinary career and become an apiarist? Sounds like a crazy decision until you meet DeWitt Barker, and suddenly it seems like the most reasonable crazy decision in the world.

Barker, now 54, was in his early 40s and reasonably content to work sales and marketing for a music distribution company — until iTunes debuted. Suddenly, Barker says that his prestigious career immediately resembled that of “a buggy whip salesman” during the introduction of the Model T.

Having been long fascinated by bees, he used his new-found free time to learn about them extensively. In short order, he became the stay-at-home father of a baby girl. Bees were what he did when he wasn’t parenting.

Barker studied apiary science at the junior college and joined the Sonoma County Beekeepers’ Association, where he signed up for something he calls “the swarm list.”

One day some 12 years ago, Barker’s swarm list number came up and he was called to remove his first hive.

He donned his protective gear, grabbed a conventional Langstroth beehive box, and headed to the suburban Santa Rosa neighborhood where a honeybee colony had taken up residence in an unusual spot.

They had congregated within the warm upholstery of an EZ-Boy recliner left out on a porch.

“When I cut the back of the chair open, there was a five-pound swarm of bees inside,” Barker remembers. “I couldn’t figure out how to get them into the box. Finally, I just stood there with my arms raised and said, ‘Come to me, my children,’ and they all coalesced in the box.

“I meditated on it,” he says, still sounding a bit stunned. “I wanted it so badly.”

Barker says that he “manipulates” a hive like that, introducing queens from stock that is good at producing honey. Over the past 12 years, he’s made his way to having between 85 and 100 hives a year stacked up all over western Sonoma County, producing about 3,000 pounds of honey a year.

As honey by Barker’s own admission wholesales for something dismal like $2.50 a pound, this is not a rich man’s obsession. But an obsession it is. He even likes the bad parts.

“For me, a bee sting is kind of like a second cup of espresso,” Barker says merrily. “It’s an adrenaline rush. They’re teaching you about being careful.”

Barker is known for purveying honey still in the comb, which is one of the ways we sell his honey on our site.

“I’m trying to bring back that method of eating honey,” he explains. “That’s insurance to the consumer that it’s real honey. Eighty percent of the honey eaten here in the U.S. isn’t really honey. It’s watered down and adulterated with corn syrup. The only way you can be certain is by buying it in the comb.”

We like how the comb adds crunch and tooth to honey when smeared on bread or added to prepared foods. We really like how Barker’s honey is made from insects lovingly cared for here at home.

Barker has some hives at his Santa Rosa property, but most of them are in West County, where the evening fog keeps blooming plants like Himalayan blackberry rich with food.

He places his hives on farmland where he knows the land offers “super clean flower nectar,” and is excited by a new opportunity to partner with Bohemian Creamery, located in Sebastopol smack on the Laguna de Santa Rosa.

Ensuring that his honeybees are near such a wealthy environment of water and flowers is important to their health and his livelihood. The five-year drought has been particularly tough on our local hives, because even though wild flowers bloomed, he says, they contained no actual nectar. Honeybees starved.

But then there are the things one can’t plan for, like when a grape grower sprays during the day and kills the bees that are at work. Or when a neighbor puts Round-Up on his backyard garden and kills them along with the weeds.

“The honeybee only has five genes that protect their immune system and they can’t evolve fast enough to protect themselves from man’s crazy activity,” Barker says.

All he can do is to breed bees good at breeding bees with bees good at making honey, nurture his hives, and look forward. Life is fine for this buggy whip salesman.

“I’m not the most tech-savvy person,” Barker says. “I want to do something that can’t be replicated by a machine.”

This entry was posted in Meet the Makers and tagged honey, honeybees, honeycomb, meet the maker.