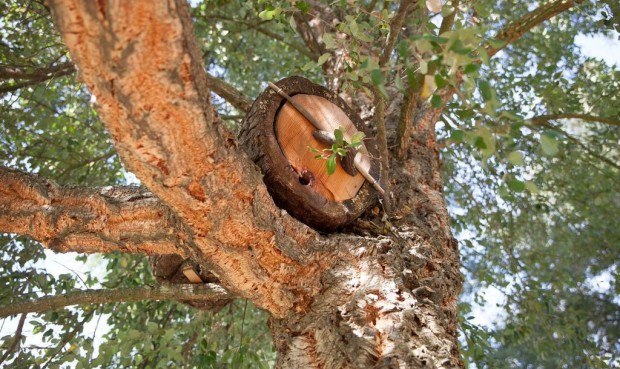 If apiarist Michael Thiele has his way, we will all soon be rethinking the hive.

Michael, whose theories and concerns about bees we have written about plenty, and who leads a hive workshop at our HomeFarm May 14-15, is beginning to think that providing a hive for bees isn’t the best thing to do after all.

Or really: At all.

Don’t get him wrong. A Sun Hive, such as he’ll teach us to build in May, is a fairly happy home for bees — as manmade structures go. It even allows humans to occasionally collect some honey.

It’s fine to take some honey, Michael assures, but leave some, too. The honey is there, after all, to feed the bees.

Because if the bees aren’t fed — and rested and disease-free and rid of stress and mites and pesticides and foreign intruders — they’ll stop feeding us.

Pollinators in general and the honeybee in particular help to produce about two-thirds of the food that humans regularly, daily, all-the-time eat. No bees, no food. It’s a simple equation.

But, Michael argues, since we regulated the power of the honeybee some 150 years ago as a part of the Industrial Revolution, we have pushed this ingenious insect absolutely to its limit.

It’s time to shift the paradigm, Michael says, and to stop seeing the bees as slaves to our almond groves, our endless growing cycles, our go-go-go 24/7 quest for more. It’s time, he suggests, to leave the bees alone.

With between 40 to 60 percent of domesticated honeybees dying or disappearing from hives each winter, it’s clear that this important component of our food cycle is in crisis.

One significant way that we can begin to lessen the stress on this species is through the management — or lack thereof — of the hive.

Current commercial hives are created for the ease of the human, not the success of the bee. They are constructed first and foremost for honey collection. That some 80,000 insects — the population of a healthy hive during summer — might have their own needs is of little consideration.

Perhaps it’s more sensical to consider hives as nests — sanctuaries, sacrosanct snug spaces that provide all that the colony needs.

Michael and colleagues like Kelsey Zaavedra, who will present the Sun Hive workshop with him next month, are proponents of those nests called “natural” hives. We are, too, and we sell natural hives at our Healdsburg store and use them at our HomeFarm.

A natural hive is one that is constructed with the bee’s health as a paramount consideration. They are made from materials that don’t harm the bees and they mimic the kind of nest a free honeybee would naturally seek.

Made of rye straw and rounded, the Sun Hive is a marvelous example of a natural hive. Better yet, it offers an opportunity for humans to interact with bees to benefit them, as the straw frame can be mudded by (human) hand and thus insulated.

Besides the Sun Hive, Michael is happy to house his bees in a simple hollow log. Honeybees naturally seek to nest in trees that have safe hollows, after all. In a hollow log, honeybees can come and go, build the hive that their collective needs, protect their queen, and have the refuge that they deserve.

It’s not easy to collect honey from a hollow log, but collecting honey is not a top concern for Michael. We feel the same way.

We love honey and beeswax and honey comb — if they’re sustainably harvested from happy, healthy bee nests. But considering the honor of helping bees thrive is mainly why we keep our own.

Michael has long insisted that the term “beekeeper” is a misnomer. We don’t keep bees, he says; the bees keep us. To that end, he suggest that the most important way we can honor their work  is to help them survive.

Is it time to shift the paradigm? The bees could certainly use a rest.