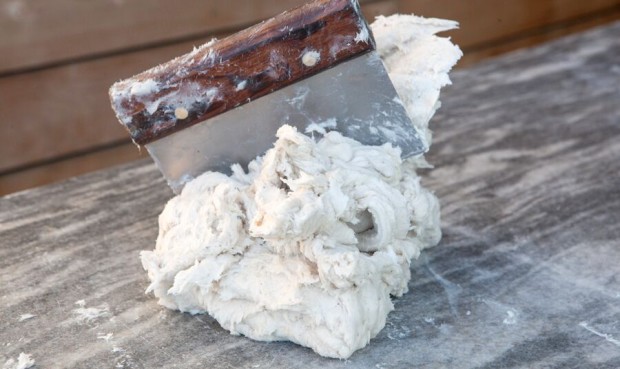 “Like butter from a pig” is how one cook describes Crema di Lardo, the airy, whipped, and spreadable charcuterie traditionally made from ground pork lard. Chef Perry Hoffman incorporates it into the Farro Verde salad in our Café. Watching him make it is part of the fun. Taught by his grandmother, Perry creates our Crema di Lardo by hand in a very specific manner.

Cutting pork fat into a large dice, Perry macerates it overnight in apple cider, herbs, salt and pepper. The pork is then ground twice.

Perry works on a stainless steel or marble table to begin to break down the remaining fat globules in the pork and to introduce air into the lardo. The surface should be cool as a foil to the warmth of one’s hands.

Some people describe the process as being a motion like giving a back rub or milking a cow.

The warmth of Perry’s hands help the magic. A machine can’t get the same effect.

This is strenuous work!

Aerating the pork with his fingertips, the lardo eventually doubles in size like cream that has been whipped. Perry says that it’s like washing hair. At least, that’s how his grandmother always described it.

When the Crema di Lardo is done, Perry laughs, “I don’t have to put lotion on my hands for a month!”