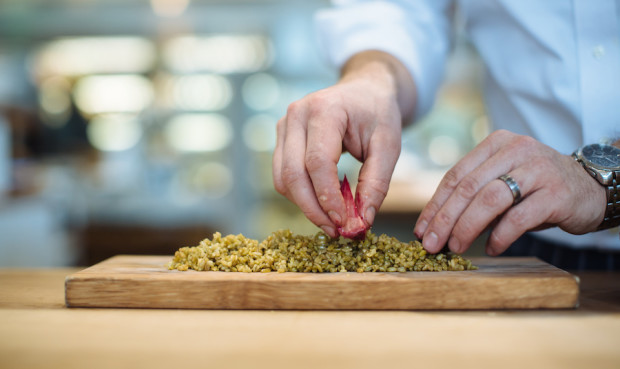 Farro is an old world grain with a complex, nutty flavor. From protein-packed grain salads to hearty winter stews and savory brunch staples, its possibilities are endless.

While we often think of farro as just one grain, the term actually refers to three ancient wheat varieties grouped by size. In Italian, the three varieties of farro are known as farro piccolo (small), medio (medium), and grande (large). Of those three, medium-sized emmer is the most widely available domestically.

Farro originated in the Fertile Crescent, located in what is now Iraq, Iran, and Turkey. Farro is still an important crop grown and consumed today in Italy, as well as in Ethiopia, which was once briefly under Italian rule.

When the Romans invaded Egypt in 47 B.C., they brought farro back home with them, where Caesar dubbed it “Pharaoh’s Wheat.” It played a key role in feeding the Roman army until it was replaced by higher-yielding grains. In the 20th century, the Germans chose to call farro piccolo by the name “einkorn.” This term refers to the bristle’s tendency to break down into single spikes. Hence, ein korn, or “one kernel.”

The defining characteristic of farro its strong hull, or husk, which makes farro less efficient for mass production, but also very nutritious.
Although relatively low-yielding compared to other types of wheat, farro performs well on poor soil. It also grows well on steep mountain fields. Farro verde is harvested wet and fire-threshed quickly over an open fire to extract the grain while keeping its moisture intact.

Whole grain farro contains nearly two times the amount of protein as found in conventional wheat. It is also high in fiber, vitamin E, and minerals including zinc, magnesium, and iron. As with other whole grains, farro takes longer to break down in the body, which helps maintain blood sugar levels. Farro is not gluten-free, but people with mild wheat sensitivities often find it easier to digest.

Farro comes in a variety of forms.

With a chewier texture than barley, farro holds its shape in stews for a perfectly al dente bite. It can also be used to makefarrotto</i — in which the grain is cooked slowly in the style of risotto. We also love it as a hot breakfast cereal layered with roasted fruits and topped with heavy cream or yogurt.

This farro salad from Heidi Swanson’s newest book Near and Far is anything but boring — chopped green olives, chives, toasted walnuts, and honey highlight the whole grain’s caramel notes. Sicilian Castelvetrano olives are preferable, but Cerignola, Lucques, or Sevillano will do. If possible, prepare the olive mixture a day or two ahead of time and bring to room temperature before serving.

In a saucepan, combine the farro, water, and 1/2 teaspoon of salt. Set over medium-high heat, cover, and bring to a boil. Lower the heat from a boil to a simmer, and simmer gently (still covered) for about 15 minutes if semi-pearled, longer if whole. Cook until tender but not mushy. Drain off any water and set aside.

Coarsely chop the olives and place them in a bowl along with the olive oil, walnuts, green onions, chives, red pepper flakes, jalapeño, honey, lemon juice, raisins, and 1/2 teaspoon salt. Stir well and set aside (or refrigerate) until ready to serve.

If you’ve refrigerated the olive mixture, bring it back to room temperature before the final toss.

Combine the farro and olive mixture in a bowl and mix to combine. Taste and add more salt or lemon juice as needed.

Serve and top with thin strips of shaved cheese and dollops of ricotta, as desired. Near and Far Cookbook