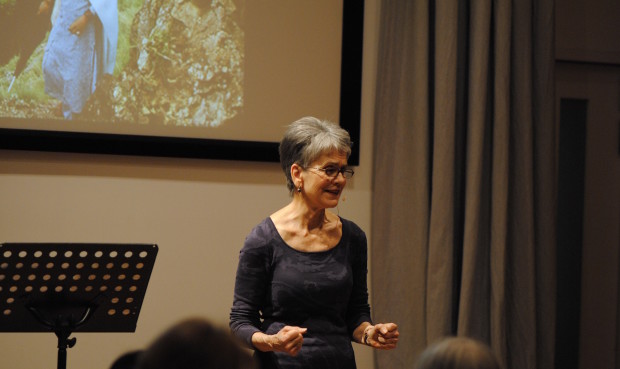 A slight woman in a jewel-colored dress, Frances Moore Lappé came to SHED on Nov. 12 in support of the North Coast Heritage Grain Alliance (NCHGA). She may be small, but Frankie — as she encouraged us all to call her — is nothing if not mighty.

It was clear from her remarks that Frankie is hugely energized by the work of the NCHGA, a new organization just launched that we’re so glad to support. With an onsite mill and relationships with grain growers, bringing personal control back over our wheat system is something that occupies us hugely and is a topic upon which we’ve written more than once before.

It’s the aim to wrest control of our food sources back into personal, human, hands that is among the core ideas that Frankie shared with us, while also giving us a glimpse into the thinking behind her most recent book, World Hunger: 10 Myths.

Why, she asked rhetorically, are so many people hungry in a world full of food? We produce 40 percent more calories around the world today than we did when her first book, the life-changing Diet for a Small Planet, was first published in 1975. Twenty percent fewer of us go hungry today than did in 1990 and, she says, if you remove China from that equation, it’s only 6 percent. So again, what’s the problem?

Frankie thinks it’s a mindset of scarcity. In the Western World, we’re overweight, diabetic, and exhausted. We’re certainly getting enough calories to sustain life, but we’re not really living it. “We live in a frightening world of lack,” Frankie said. “We’re creating a world together that none of us would choose.”

She puts it down to an easy code: The three esses. Scarcity mind-set. Stasis of action. Separation from the natural world and each other.

And of course, if you choose to look at it that way, we are in the veritable handbasket headed for Hell. Frankie delineated just a short list of environmental woes, including top soil erosion, lowering ground water levels, phosphorous and nitrogen loss in the soil, diminishing biodiversity. . . . You can probably add many other items to the list.

We’ve lost our way in a strangely important corner, too: The marketplace. We no longer have a system of stalwart exchanges between provider and consumer, Frankie said. We are marketed to and co-opted by large multinationals that have diffused the core market exchange that humans have practiced for millennia.

But all is not doom and woe, by any measurement. The establishment of the NCHGA opposes that diffusion, as does the rising boom of farm markets across the U.S.

Looking into the audience, Frankie said, “The deepest service you at the Grain Alliance are providing is not just in directly reversing the biodiversity loss upon which all life depends. It’s also how you are reshaping our sense of  ourselves, redefining the human challenge and what’s possible.”

Because this is Frankie’s core message. Our brains can be changed.

Neoplasticity is evidenced by thought patterns that become established, whether they’re good for us or not. What about actively changing them and creating new neural pathways that allow us to work together more effectively, take back the power from the megaliths, make better choices for ourselves and spread new stories that will in turn change new sets of synapses?

“The only choice we don’t have is whether to change the world,” Frankie said. “Everything that we do or don’t do changes the world. This is not a New Age fantasy, this is a New Rage of positive possibility. Our actions are contagious; courage is contagious!”

“You are choosing to trust the Earth and each other as you build the new Grain Alliance to bring back heritage grains,” she told the audience, now entirely rapt. “Fanned by the new science of ecological agriculture, we are discovering what the ancients were trying to tell us. I also see you challenging the radical, failing notion of a market disconnected from community values.”

Frankie then listed and described a raft of encouraging projects from the power of micro-financing and community empowerment to change people’s lives to the work of seed savers and the successful coalition of dairymen who banded together to form what is today’s largest brand of organic milk. Change your mindset, re-set your neural pathways, it can be done.

“It is truly not possible to know what is possible,” she said, “so we are free. We are free to go for the world we want. Where is your power? It’s in your vision, in your buddies at your side, and your courage to chart the way. May you glory in it!”

“Just know,” she said as the audience applauded, “I’m cheering.”

This entry was posted in Modern Grange and tagged writer.