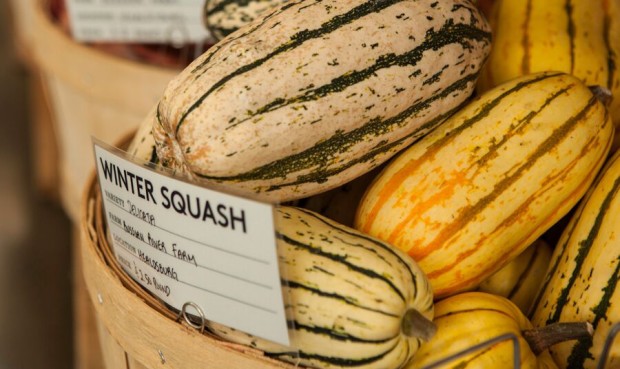 If you’re eating seasonally and it’s late fall/early winter, we can only suspect that you are eating squash. And plenty of it. But don’t fall into a rut. Squash encompasses a wider world than you might suspect. Here are a few of our favorites.

Delicata: Long and a creamy green, white, and yellow, the Delicata is lovely to behold. It’s even lovelier to eat; not only because it’s toothsome, but because it’s easy. Unlike other squash, you needn’t peel the Delicata — you can eat it skin and all. Slice, scoop out the seeds (they can be roasted like pumpkin seeds) drizzle with oil and salt, and bake until tender. Once cool, they add a delightfully chewy texture to salads, too.

Butternut: The old starchy standby has gotten many of us through a long winter and, if prepared correctly, reveals its sweet nature. The butternut must be seeded and roasted and pulped — but after the work is finished, the goodness can begin. Consider roasting your butternut as soon as you come home from the market so that it’s waiting for you when you’re ready for it. We love it of course puréed in soups, but it’s as versatile as meat. Try it as a bruschetta with a bit of homemade ricotta atop toasts drizzled with a balsamic vinegar reduction and plenty of pepper!

Thelma Sanders Sweet Potato Squash: A Missouri heirloom variety rediscovered and embraced, the Thelma Sanders makes a good replacement for the Butternut and can be used in most of the same ways: In soups, purées, and as a meaty main. Growers love it for its sweetness and yummy texture when roasted, buttered, and topped with brown sugar, but many rave about the excellence of its seeds when roasted alone.

Acorn: The ubiquitous fall form, the Acorn doesn’t get enough respect, recently prompting Bon Appetit to come to its defense, touting its versatility, its edible skin, and its sturdy replacement for the dread bread bowl. We love it stuffed with greens and sausage and mushrooms and sage and topped with cheese and panko crumbs for the ultimate chilly night comfort food.

Guatemalan Blue: Seed savers report that this is a very difficult variety to find — but we have it! In the “banana” family of squash, so named for its long shape, the Guatemalan Blue is a cut-and-come-again refrigerator staple, beloved for a sturdiness upon harvest that allows you to take just the slices you need for what you’re cooking that night and wrap it up for the next time. Once seeded and roasted, its pieces make a sublime addition to risotto.

Sibley: Also know as the “Pike’s Peak” squash, the Sibley is our go-to for winter pies instead of traditional pumpkin or even sweet potato. A Slow Food “Ark of Taste” varietal believed to have been used in Native American cooking before the Europeans arrived, the Sibley actually gets tastier and sweeter the longer it is stored.

Green and Red Kabocha: Often referred to as a “Japanese pumpkin,” Kabocha is believed to have aphrodisiacal qualities, not something ordinarily associated with the homely squash family. With a fluffy texture that harkens sweet potatoes and pumpkins, the Kabocha reminds many of roasted chestnuts. Its natural sweetness makes it a lovely foil for savory dishes and we’re sneakily partial to it prepared as a savory panna cotta served atop tart greens.

Spaghetti: No pasta, no problem! But you already knew that. But what about as a substitute for potatoes or risotto in latke-like cakes? Ah. And: Yum. Split a Spaghetti squash lengthwise, scoop out seeds, and roast. Then use the strings of the squash in an egg batter with cumin and sliced jalapeños, sautéed shallots and finely minced fresh ginger. Add a little flour to hold and lightly fry these cakes to serve with fresh plain yogurt and chopped cilantro.

Cinderella (rouge vif d’etamps): Brightly hued and slightly flattened, the Cinderella looks great on the hearth but tastes even better in the oven. A favored baking pumpkin, the Cinderella really shines in pies — but it’s good all around the dessert tray, enlivening cookies and cakes, too. We like to use this sweet flesh — cooked, puréed, and cooled — in seasonal ice creams as well.

Winter Luxury: Seed growers exclaim over the velvety texture of this excellent pie pumpkin. (In fact, it was first marketed in the late 1800s as Livingston’s Pie Pumpkin.) Expect a typical six-pound gourd to yield two delicious pies. It doesn’t keep well in cold storage, so prep and freeze before Thanksgiving to ensure a bright treat as winter’s drear takes hold.

Polar Bear: We don’t eat these white beauties, but we do admire them. Smooth skinned and glowing nicely in the fields at dusk and by the fire inside at night, this is one of our favorite fall gourds to bring in the house for holiday decorating.

This entry was posted in Cooking and tagged cooking, food, winter.