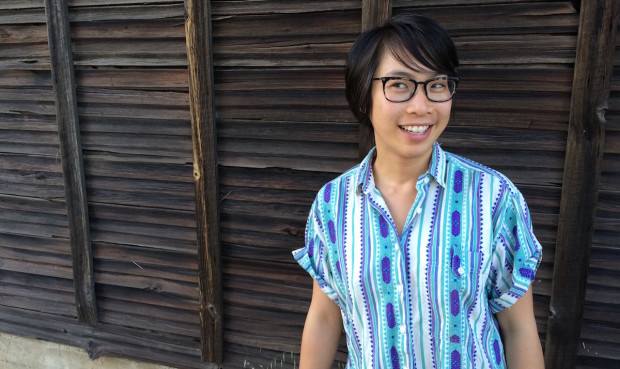 We’re proud to announce that Mai Nguyen is the new miller at SHED, in charge of making fresh flour and polenta each Friday afternoon. But Mai’s ability to competently mill is such a small fraction of who she is that we can’t leave it at that.

Just 30 years old, Mai brings a breadth of wisdom with her that is humbling to those of us who might have stumbled through our 20s with little direction.

A no-till farmer working five acres in Ukiah, Mai dry-farms rice — a grain normally grown in flowing water — by digging deep furrows to catch whatever scant rain the skies bestow and then covering them deeply with compost to retain the wet. She also specializes in growing traditional Southeast Asian produce that not only nourishes the body but salves the soul of immigrants.

The child of a Vietnamese refugee family, Mai knows that fleeing war and coming to a new country with a new language offers challenges at every turn. Having familiar food is a small comfort, but an important one.

As the manager of a farmers’ market in a low-income area of San Diego while still in college, Mai launched a market match program that allowed Cal-Fresh recipients to double their buying power in her stalls.

While adequately serving the Mesoamerican diet of her Latino customers, Mai found that the large Vietnamese community in the neighborhood wasn’t getting the food they craved and knew. So she found a Fresno-based Hmong farmer willing to bring two trucks full of Southeast Asian produce each week. He regularly sold out in less than two hours. The farmers’ market even had to install guards to prevent customers from overrunning the stall.

But his food was conventionally grown and treated with pesticides. Mai thinks the community deserves better than that.

Mai calls her Ukiah spread Ca Phao Farm, explaining that ca phao is the name of a small, striped, spherical eggplant that her grandmother taught her to plant as a child, the first vegetable she was able to successfully grow other than mint. She uses draft horses to make her rice furrows and is pleased that her soil is clean enough, she says, “to lick.”

But Mai came to farming circuitously. She studied atmospheric physics as an undergrad and has a masters degree in geography. “I made climate models,” she explains. “It was the hot new thing, and I was also trying to break up my time in the lab by working in the student garden. I was in charge of compost. That’s what brought me outside. I was interested in nutrient cycling and how we used all the materials in the world.”

Slowly, Mai became something of a systems geek, her own interests cycling out in ever-widening circles. “That’s at the base of how I look at a lot of things,” she says. “What is the system that we’re functioning in and how do we make it efficient, equitable, and just? I didn’t get into the farming part until I wanted to do more useful things; I didn’t want to model the climate. I didn’t want to just grow the soil and I didn’t want to just measure how things were getting crappier.”

Then Hurricane Katrina hit and she switched focus to disaster management. “[Katrina] had a big impact on how I viewed the work that has to be done,” Mai says. “I went to New Orleans and then I worked abroad in Southeast Asia, mostly in refugee camps. I thought a lot about what are we doing in the world to make these disasters happen.”

She realized that she was reacting to the disasters instead of being proactive about preventing them. “That got me to thinking about what role I want to have in the world.”

She decided to work on a community farm in San Diego which in turn led to her role at the local farmers’ market, which eventually sent her on a journey to farms across North America, a series of circles ever-widening.

Having lived in such cold climates as those in Alaska and Canada where snowy winters don’t allow crop generation, she became interested in a seasonal, regional diet. And in Alaska and Canada, that can mean grain. She worked farms across the country, eventually meeting grain guru Jack Lazor. While touring grain growers in California, she met Doug Mosel of the Mendocino Grain Project, who had a job open. She interviewed with him for three days. Needless to say, she got the gig.

Today, she stays close to Doug as her mentor and works with Deborah Walton of Canvas Ranch on the new North Coast Grain Alliance nonprofit that Deborah began this year. She’s also involved with Monica Spiller’s influential Grain Connection organization. When SHED opened in 2013, Doug was invited to a soft launch party and brought Mai along.

“We were immediately, overwhelmingly, impressed with the place,” Mai says. “A lot of people have that reaction. ‘Wow, this is what the world could be.’ Not having plastic everywhere and everything made carefully and intentionally. It was instantly refreshing walking in there.”

We expect Mai to walk in each Friday from 3pm to 6pm to run our mill. We hope you’ll make a moment to meet her. “I don’t think that anyone gets to see mills these days unless you’re in a factory,” Mai says. Ask her about it. Chances are, she’s got a story to tell.

Mai tells the story of SHED’s participation in the local grain movement when she speaks on Saturday, Sept. 5, at a Nopalize luncheon at Front Porch Farm. Use the discount code SHEDComp at check-out for half-price tickets.