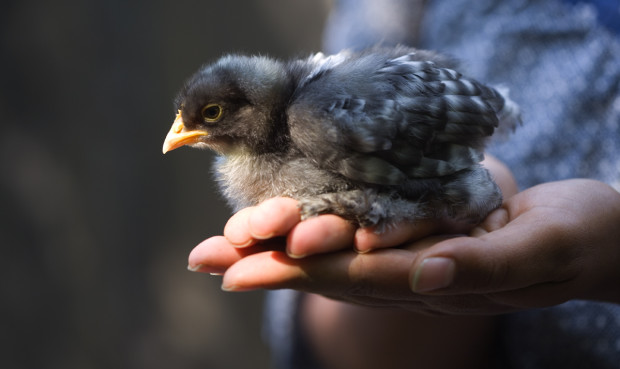 Grossly caged with thousands of others, bred to grow quickly and end hugely, kept indoors, denied the most basic rounds of procreation and recreation, the industrialized chicken is one sad bird, indeed.

But with the groundswell of interest in backyard chicken-keeping, there is hope for the chicken in the form of the Sustainable Poultry Network (SPN), a small coalition of some 80 members across the United States who are committed to resurrecting and strengthening heritage breeds.

At HomeFarm we love our chickens and used to avidly await the postal carrier’s late-winter arrival, packed with newborn chicks. Not only is this old-fashioned delivery system due to disappear per food safety regulations, it’s not the best way to start, extend, and maintain a local flock.

Sophia Bates used to get her chicks in the mail too, and her original flock of Barred Plymouth Rock chicks came via post all the way from North Carolina to the Philo Apple Farm, where she works with her family business. But no more. Nowadays, she breeds her own chicks according to SPN’s core values and trades them with other members of the network.

“We’re all trying to localize our food systems,” Sophia says. “Chickens are the ultimate small homestead food source and we all still have to get our chickens from Iowa — how localized is that?”

Sophia will be at SHED on Sunday, April 19, to sell her chicks direct to you for just $6 each during our Spring Hoedown second anniversary party.

While every chicken, given the chance, has the innate desire to peck the ground and forage for food, the modern industrialized bird is rarely given the chance to do so (don’t let the term “free range” fool you) and, moreover, is now ill-equipped to utilize the food it forages, Sophia says.

Birds raised by SPN’s standards are intended to spend their days outside eating directly from the ground, just as chickens have always done. They’re also bred to grow more slowly, have stronger bones that adequately support their weight, and have long happy lives. All of this makes for a tastier bird and a far superior quality of egg.

Sophia sells her heritage breed chicks as “straight run,” meaning that the sex of the newborn bird is still unknown. Hens may last you a good four years before heading to the stew pot; cockerels can be harvested at 16-18 weeks for a delicious meal.

“Everybody eats roosters,” Sophia laughs. The average chicken-eater just doesn’t know it. Harvested before they grow a full comb and begin crowing, cockerels fill many an American pot.

Having completed just her first breeding and hatching season, Sophia is enthusiastic about SPN and its “slow poultry” methodology. Among the organization’s tenets is the careful breeding of heritage birds to reintroduce genetic components once common to farms but not desirable in large operations.

“The industrialization of the food system really brought on a new wave of chickens,” Sophia says. “The Sustainable Poultry Network is a group of people who are interested in reinvigorating the genetics from the heritage breeds. They’re still around, but people haven’t been selectively breeding them; we’re finding the best genetics that exist now and trying to bring them back to where they used to be at the end of the [last] century.”

Among the great things about chickens is that a generation can be eclipsed in about 12 months, so reintroducing favored old-fashioned genetics can move swiftly. The type of chicken she raises is an example. “Barred Plymouth Rocks were a main industry bird around WWII,” Sophia says. “Things change with chickens so quickly because you can breed a generation in a year.”

People being people, “pretty” chickens of varying colors remain more sought-after than white chickens like the Leghorn, an egg-laying master found in most large operations. Sophia’s Plymouths exemplify “pretty” with their black and white feathers and bright red head markings. But they’re more to her than just a landscape enhancement.

“Raising your own birds is such a nice easy step towards self-sufficiency,” she says. “It’s a really satisfying, gratifying thing to keep backyard birds and it’s an amazing step toward creating your own food.”

Want to get skilled up? We host a backyard chicken keeping workshop on Saturday, April 4, with Nick Rupiper, the “Chicken Guy,” that will give you all the basics.

Meet Sophia Bates and her chicks on Sunday, April 19, at our Spring Hoedown, an afternoon party to celebrate our second anniversary. How to Boil an Egg