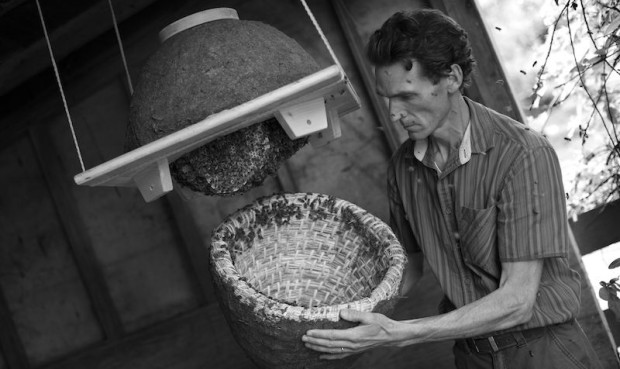 Michael Thiele removing the bottom of a Sun Hive.

Around this time of year, a healthy honey bee hive prepares to swarm. Most urbanites might be alarmed by the sight of 10,000 bees clinging together like a living beard hanging from a tree limb, but our ancestors would have been cheered. After all, a swarming hive is one that is reproducing.

Reproducing itself, that is, allowing a new hive to form in the old nest. As the weather warms and the sun climbs higher overhead with the coming of summer, honey bees need to make room for more of the honey that will sustain them through the winter. The queen and nearly two-thirds of the colony will take off one day soon looking for a fresh home, leaving behind an emerging queen and her small cohort to build anew.

Upon return, this small legion — typically just 300 to 500 members of the hive — do what’s called a “waggle dance” to advertise the goodness of the place they’ve found. Intrigued, other bees are able to interpret the dance so accurately as to visit the exact spot being danced about — say, one tree within a full forest — and examine it for themselves.

Should it be found to be satisfactory, they return to the hive and waggle their enthusiasm to others of their hive. When enough bees do this, the collective eventually decides upon a new home, showing an astounding 99 percent accuracy in making a good decision.

Cornell professor Thomas Seeley calls this the Honeybee Democracy in his eponymous 2010 book about the perfect collective that is a honey bee hive.

Bound by the sun above and gravity below, a bee’s waggle dance indicates the exact direction in which the proposed new home might lie. Seeley’s research reveals that the amount of time that the waggling bee spends moving in one direction to describe the new site is exactly correlated to its distance from the current swarm, estimated to be one second of waggle dance per 1,000 feet of distance.

When the old queen takes her leave, the new queen emerges and flies out, quickly mating with 30 to 40 male drone bees before returning to the hive, where she will pump out some 1,000 eggs a day for the next four years or so, never again needing to mate. A hive only supports some 300 drone males; the rest are female and they work, guarding the hive, gathering nectar, feeding larvae, protecting pupae, and attending the queen. A pheromone on the queen’s body brushes onto workers, who then brush it on to others as they busy themselves so that all in the hive know that the queen is healthy and alive, thus calming the collective.

And these are only some of the things that we know about the honey bee.

Shouldn’t creatures that possess such amazing qualities be honored? Natural apiarist Michael Thiele certainly thinks so. Michael, who presents a workshop with us on Sunday, March 15, is founder of Gaia Bees and a former Zen monk whose way with these important insects is so calmly focused that he can move a swarm with his bare hands.

A German native who now resides in Sebastopol, Michael takes particular umbrage at the language we use to describe bees and their world. We are not beekeepers, he advises; rather, bees keep us, providing at least one-third of the food we regularly consume through their pollination efforts.

Colony Collapse Disorder, the term used to name the as-yet unexplained demise of industrial bees, is not a disorder, he says; that implies that the bees are at fault. Rather, Michael believes that it is the enslavement of these remarkable insects, millions of which are at work right now in Central California’s almond groves, that is decimating their numbers. Regular commercial ag practice, for example, doesn’t take note of the bees’ labor, and almond flowers are often sprayed with pesticide just as the bees are visiting them.

Michael — and we — believe that conventional hives are antithetical to a bee’s natural nesting. They are constructed for human ease, not bee health. An advocate of natural hives that allow bees to build according to their own perfect instinct, at the workshop Michael will discuss their nature and habits and demonstrate several hives that allow bees and humans to better co-exist.

The apiarist who helps us tend the bees at our own HomeFarm, Michael has placed several natural hives there, examples of which we carry in our Healdsburg store for you to bring home. All of these hives are designed to minimize frequent opening of hives, which can result in a weakened hive.

The Golden Hive, constructed of pine, is a one-room enclosure with tall frames that allows the development of a large brood nest and by design minimizes the impact of human/bee interaction.

The Warre Hive, devised in the early 1900s, features a vertical hive into which extra boxes are added to the bottom of the stack, causing comb to be regularly harvested and cycled out of use. This prevents old comb from being reused which might be laden with environmental and agricultural chemicals and toxins.

Log Hives are just as they sound, fashioned from logs that have been hollowed as in nature, providing a completely bee-centric environment perfect for those who want to host bees, allowing their lives to unfold according to their instincts.

Constructed of rye straw and elegant in shape, the Sun Hive resembles a bell, is often plastered with manure on the outside to provide insulation, and has nine half moon-shaped movable arched frames. The comb is built naturally and can be almost two feet deep. The entrance is located at the bottom of the hive. We are organizing a Sun Hive-making workshop in the U.S. later this year.  If you are interested, send an email to gaiabees@gmail.com and we will keep you updated on dates/information. Sun Hives are currently not available for sale (worldwide)

Known as a superorganism, a bee hive is a true miracle of democracy and communal sacrifice for the whole. Michael uses the German word Bien to describe it, emphasizing that a hive is nearly mammalian in nature and might indeed possess its own personality and soul.

Ready to learn more? Join us on Sunday, March 15, at noon for an amazing afternoon with Michael Thiele.