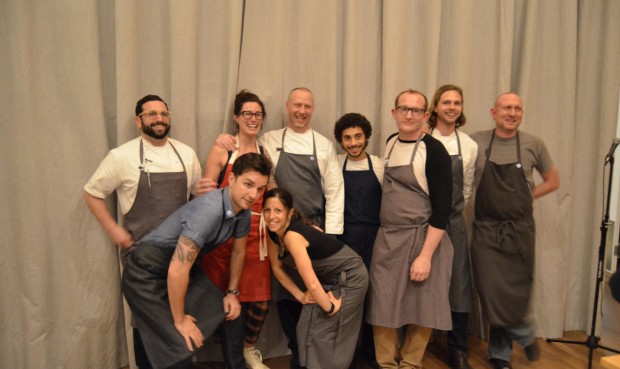 The art of fermentation evolved from the need to preserve food far beyond what was possible before the advent of refrigerators or ice boxes. Now that we have the luxuries of the kitchen fairly sorted out, we nonetheless continue to ferment and preserve. Why? Because it’s delicious, fascinating, and because our ability to understand the teeming world of tiny organisms that fix our food has never been more accessible.

Indeed, the mysteries of the microbial world, the innovations of the high-tech food world, and the investigations of the forensic food world came together wondrously last Saturday, Feb. 21, when we hosted the “Innovations in Fermentation Workshop and Dinner” in our upstairs Grange.

Presenting and cooking for us were Cortney Burns of Bar Tartine, Ali Bouzari and Dan Felder of Pilot R+D, Kyle Connaughton of Pilot R+D with Kevin Farley of the Cultured Pickle Shop, Brian Hunt of Moonlight Brewing Co., and our own culinary director Miles Thompson.

What ensued was a heady seven-hour swirl of learning, eating, and drinking from which arose several  facts and observations.

Cortney describes the process of fermenting the trout and rice that formed our second course.

Leading off the afternoon, Cortney explained that Bar Tartine makes all of its own ingredients, mostly from curiosity. How is yogurt best made, what happens to the taste when dry your own spices, how long can a daikon radish be kept and still resemble something somewhat akin to a daikon radish?

Saying that her kitchen often chooses to cook whatever they have “too much of,” Cortney suggested that the best way to keep your lettuce and other perishables from simply perishing is to throw them into a crock you might keep out on the counter and ferment them. Lettuce, for surprising example, can be fermented nicely; daikon is tricky. And most fermented foods can be kept for years before consumption.

Speaking like the experienced presenter he is, Ali stated, “The only reason to ferment stuff is to make food taste better,” before launching into a scientific examination of such variables as the schematics of flavor and the search for umami.

Ali let us know that imitation vanilla is made from the byproducts of paper pulping; that expensive forest truffles contain such composite aromas as those of pig sex hormone, vomit, and garbage; that the taste of tomatoes mostly emanates from the tomato vine itself, so putting vine cuttings into the last 30 minutes of a long-cooked sauce brightens it; that celery is wasted in your stock because its contribution is aroma and that simply evaporates; that MSG is found in our own cellular structure; and that there is simply no possible way to clean a stainless steel surface of its microbial residents.

Kyle introduced us to the Japanese word “shun,” describing it as that moment when a growing edible is at its absolute peak. Kevin discussed the meta-shun, in which an edible picked at its peak is pickled to that process’ peak.

Brian underscored that water is the most important part of beer, hops are a superfluous additive made popular due to ancient tax laws, and that incense cedar tips and redwood tips and mugwort and wormwood make for lovely beers.

Miles related how an fermentation mishap involving inexact measurements resulted in a finer crème fraîche than he had ever before tasted.

The group variously discussed fermenting meat (“I did some proteins to get attention,” Kevin laughed); the challenges of coaxing mold into rice to create koji (“This is something incredibly complex masquerading as something incredibly simple,” Dan sighed); and the opaque nature of soy sauce (“We know what soy sauce can do, but not what it is,” said Ali).

Attendees broke for an hour to allow staff to re-set the Grange into a dining hall and for the chefs to put the last touches on their food. We regrouped downstairs outside in the strangely balmy February night for passed appetizers and glasses of sparkling wine before returning upstairs to two long communal tables to share a fermented feast like no other. Kyle’s wife Katina joined the team in the kitchen.

Lively and photogenic, the meal progressed to an arc that featured Kyle’s use of the donabe Japanese earthen ware made in Iga, Japan. Earlier in the day, Kyle had explained how the clay in Iga is unusual as it’s studded with tiny fossils that create room in the clay and benefit air circulation in the dishware as it cooks. That fascinating fact was forgotten as we collectively gasped at the sculptural arrangement of the food, looked at each other in delight, and began to eat.

In the kitchen, Katina, Ali, Dan, and Kevin lay out various Tsukemono pickles.

Each donabe is hand-made and unique.

Fourth:
A Selection of Cultured Pickle Shop Tsukemono
Ice Filtered Duck Broth with Kohlrabi and Miners Lettuce from Between the Vine Rows
Pumpkin Kasuzuke and Sesame Gohan from the Kamado-San Donabe