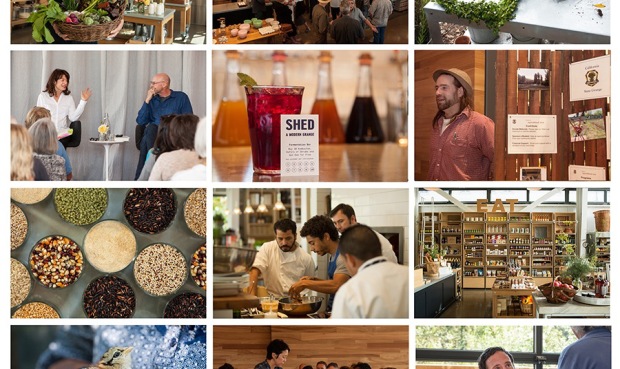 It’s one thing to have a dream, it’s quite another to set that dream in motion and watch it take on a velocity and arc not to be guessed at when things were merely at the dreaming stage.

That’s been the wonderful magic of our Grange and the first full year of operations for Healdsburg SHED as a whole. Opening our doors in April 2013, we couldn’t have imagined what an entire year might look like and eventually encompass in 2014. As December’s end prompts us all to cast a quick look back, we indulge in a bit of nostalgia for the year that was.

And what a year! A hurried count reveals that we hosted more than 50 community and nearly 20 nonprofit events ranging from chef dinners to farm lunches to live music and dance to art exhibits to film screenings to lectures to yes, live butchery.

Our upstairs Grange was the meeting place for the local Chamber of Commerce and the Healdsburg Farmers’ Market, the Russian Riverkeeper organization, and our Community Foundation affiliate. We hosted the Farmer’s Guild and the Greenhorns more than once. We had beekeeping and pruning and fermentation workshops. Launched a series devoted to Biodynamic farm standards. Spent a whole month saluting our local watershed with panels and walkabouts and story telling. Celebrated jazz bassist Charlie Haden’s life. Feted our area producers with Sunday Suppers and farm market luncheons. Roasted hot dogs on the Fourth of July; gave out popcorn balls and cider on Halloween; celebrated the winter holiday season with hot chocolate, cookies, and lively klezmer music. Oh the fun!

The “West Coast Live” radio show set up shop for two consecutive weekends, broadcasting directly from our second floor via Skype. Charles Phan and Loretta Keller and Gabrielle Hamilton were just some of the nationally recognized chefs who graced our place. Sonoko Sakai educated on koji and soba noodles and the importance of local heritage grains. Chad Robertson of Tartine Bakery described how his slow fermentation process helped his wife with her wheat intolerance — and launched his latest iteration as a chef. Michael Pollan told jokes about shaking Chad Robertson’s hand for the possible yeasts. Wearing a chain metal belt, butcher Rian Rinn broke down half a heritage hog while rattling off jokes and anecdotes. There were a lot of smiles this year.

Downstairs in our Pantry and Larder areas, we had pie-making demonstrations, weekly milling sessions, chocolate tastings, and Señoras making tortillas by hand. We hosted classes in such disparate topics as cocktail mixology, drip irrigation, knife sharpening, culinary herbs, and vermiculture. SHED came into its own vision as a place to gather experts and those interested in farming, gardening, cooking, and excellent food together in one space.

Our space itself was honored in 2014, winning a prestigious James Beard Award for restaurant design, an honor at which we still quietly gasp. Our new webstore was launched, and we now offer over 70 items for you to bring a bit of SHED into your own home, wherever you may live. Our kitchen evolved, with culinary director Miles Thompson taking the helm. Our wine program grew to better embrace the magnificence of our Northern California grapes and vintners. Our coffee bar expanded its offerings to include fresh morning juices in addition to the excellent coffee and pastries.

Through it all, we have our partners, the agriculturalists, producers, and makers whose work and wares we are so proud to purvey. In addition to the produce and flowers we source from our own HomeFarm, we rely on the fresh, clean, and flavorful food brought to us by MIX Garden, Bernier Farms, Preston Farm and Winery, Six Oaks Farm, Shone Farm, f.e.e.d. Sonoma, Strong Arm Farm, Foggy River Farm, Dry Creek Peach, Front Porch Farm, Gradek Farm, Three Sisters Pomegranates, and Wyeth Acres.

We are glad to offer our customers the best, most sustainably raised and humanely harvested meats possible, provided to us by Marin Sun Farms, Sonoma County Meat Co., BN Ranch, Llano Seco Rancheria, and Zazu’s Black Pig Bacon. It’s an honor to support and amplify the important work of the Mendocino Grain Project, which is working to help all of us understand the importance of self-reliance in our food supply.

Of course, we’re already busy with our plans for 2015, including a Biodynamic beekeeping class on Jan. 4 with natural apiarist Michael Thiele of Gaia Bees, a screening of The Gleaners and I documentary in conjunction with Farm to Pantry on Jan. 14, and a continuation of the Brave New Music chamber series begun in 2014 with the Szymanowski Quartet appearing in February.

While we can’t pretend to know what 2015 might bring, we are fairly certain that it will see our space again filled with chefs and farmers and writers and butchers and artists and fermenters and musicians and dancers and activists and hopefully — with you. We simply cannot wait.