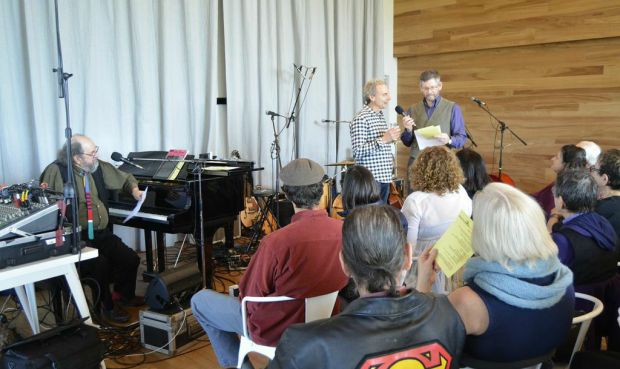 You could even hear it from the lot across the street. There was an irresistible thump-thump-thump accompanying the joyous noise of people cheering and clapping. Sedge Thomson’s “West Coast Live” had set up its radio program in our upstairs Grange, the David Luning Band was killing it, and the audience was on fire. Absolutely: It was 10am on a Saturday morning.

Taping just days after six-plus inches of rain had deluged downtown Healdsburg, the technicians from “West Coast Live” had to scramble. The dedicated lines normally used to transmit this traveling show weren’t available, and the whole thing had to come over the radio via Skype, a clever hack set up just minutes before showtime. It worked beautifully.

That magic (sans Skype, we hope) is slated to happen again this Saturday, as Sedge, pianist Mike Greensill, and the dedicated staff from KRCB 91.1-FM return to our Grange for another live taping on Saturday, Dec. 20, at 10am sharp. If you haven’t treated yourself to watching the magic of radio being made — far cleaner than sausage, we hasten to assure — consider joining us this Saturday. If not, tune in to your own local NPR affiliate to listen live.

We’re particularly excited about this week’s line-up of guests. One of the great things about hosting “West Coast Live” is that its producers ask the hosts to help suggest guests. SHED co-founder Cindy Daniel tendered a list of some 30 of Sonoma County’s most celebrated agriculturalists, musicians, thinkers, artists, and craftspeople, and WCL staff made the selections.

• Dale Dougherty. The founder and executive chairman of Maker Media, Dale, a Sebastopol resident, is also the man who coined the term “Web 2.0” and co-founded O’Reilly Media, the influential publishing house. Since its inception in 2004, Maker Media has driven a DIY and DIT (Do It Together) movement that ranges from the pages of Make: Magazine (launched 2005), and Maker Faires held annually in the SF Bay Area and in New York (with hundreds of mini Maker Faires held the world over). Even President Obama hosted one at the White House this summer.

• Charlie Musselwhite. Perennially award-winning and multiple Grammy-nominated harmonica player and bluesman who has performed with everyone from John Lee Hooker to Tom Waits to Eddie Vedder, Charlie stays close to Sonoma County, his home-away-from-Memphis. His newest release is Juke Joint Chapel.

• Will Durst. Political satirist extraordinaire, Durst is a Bay Area resident who promises a taste of his annual Big Fat Year End Kiss Off Comedy Show, including the Top 10 Comedic News Stories of 2014. We’re pretty sure that Dick Cheney will loom large in Durst’s pantheon of shame.

• The Easy Leaves. This home-grown acoustic Americana duo of Kevin Carducci and Sage Fifield has recently been embraced — think: massive bear hug — by the traditional Country/Western community, a boost that has recently found them opening for such big names as Dwight Yoakum and the Nitty Gritty Dirt Band. Their newest release is American Times.