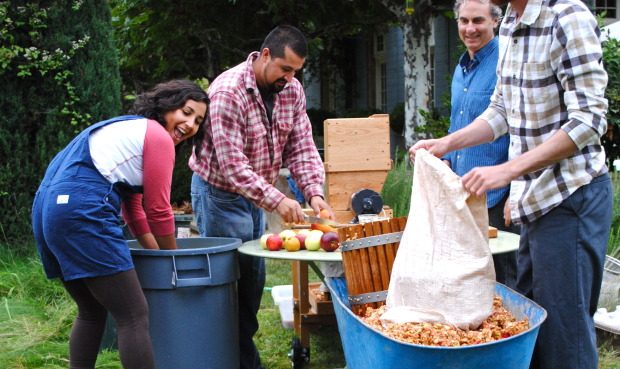 It’s apple time in Sonoma County. The air is scented with their sweet tang as they hang from trees and their peculiarly attractive odor of fresh ferment wafts up from under trees.

Apple time means freshly pressed juice, lots of reasons to have dessert, homemade apple sauce in the mornings, and for us geekier types — a chance to peruse old crop reports.

For those with a narrative bent, crop reports offer both a swift glimpse into a different era and an acute look at the present day. In Sonoma County particularly, crops dictate the story of our area and its use.

Fortunately placed as we are in a spot that Luther Burbank famously praised as “God’s chosen place on Earth,” our crops have trended as the populace has changed.

Still known as “Butter and Eggs” town, Petaluma once raised most of the chicken and eggs consumed within a few hundred miles, supplying San Francisco with the majority of its poultry and dairy needs. In the 1963 crop report, we read a short mournful statement that egg production in Sonoma County had dropped precipitously from 1962 to 1963 as large outifts — yes, factory farms — rapidly eclipsed small producers, setting the stage for the world as we now know it.

We also see that, in 1963, total Sonoma County apple production was at nearly 9,000 acres and the total fruit sold for $4.08 million; that would be $30.1 million in today’s dollars. Not a bad chunk of change.

By contrast, there were over 10,000 acres planted to winegrapes back in those days, selling for $2.7 million; that’s $20.2 million in current dollars but a mere pittance compared to modern worth.

Because, of course, winegrapes have eclipsed the apple, with the 2013 crop report showing apples reduced to just over 2,000 acres and making just $5.8 million. Grapes now have over 64,000 acres of plantings and sold over $605 million last year.

Thus apple country became wine country. Healdsburg, once lovingly known as “Pruneville,” used to produce far more stone fruit — particularly Italian plums — than anything else. Today, tourism and wine pay the bills. (Prunes aced wine grapes in ’63, with $3.4 million in circa sales; they’re not even listed in the ’13 report.)

But through it all, the ups and downs, the prunes to Pinot, the apples to apple sauce, there has been the land. Rich, fecund, utile, and endlessly giving — Sonoma County may in fact be a favorite of the Big Guy in the Sky. And the apple orchards not replanted to grapes continue to give. In fact, it’s beginning to look a lot like apples to apples here these days.

The Gravenstein apple, a tart cooking fruit unique to Sonoma County, has been embraced by Slow Food USA as an “Ark of Taste” comestible, meaning that its seeds and flavor have been saved for generations to savor. And increasingly, those orchards still extant are yielding a new product: hard apple cider.

We’ve written about cider before, as it is a drink nearly as complex as wine with tannins that allow some varietals to be laid down like a good Cabernet, and its popularity is hugely on the rise.

In fact, having large beverage companies jump aboard the cider train is very good news for our own apple producers. With Anheuser-Busch and Stella Artois now making apple-based drinks, our artisanal producers have some big players to push against as beer-loving consumers try something different, begin to learn about it, and naturally want to taste something better.

At our own HomeFarm, we’ve tried to create an heirloom library of great eating apples. It’s hot in the Dry Creek Valley where we are, and not every variety likes the long sere days, so we’ve chosen carefully and try to interplant under taller trees to offer a little shady respite for our pommmes. While Western Sonoma County, with its coastal cool, is known for its orchards, we want to keep some of that growing in Healdsburg, too. It can’t all be vines.

While winegrapes will most certainly continue to reign supreme in Sonoma County, our apples have a better chance than ever before to be nurtured and indeed, planted. We’ll look to see how it goes in the next crop report.