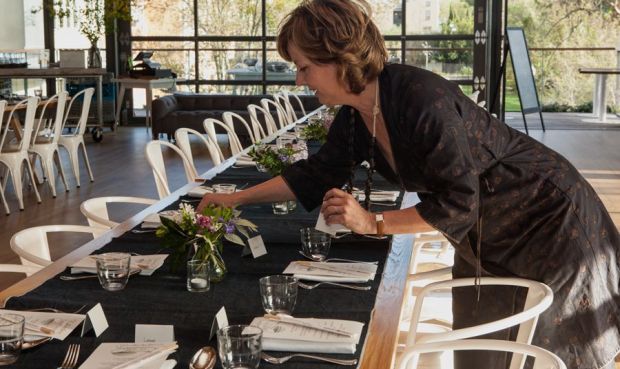 Autumn is when the leaves certainly rustle in the book business! This year's crop of cookbooks by esteemed chefs may be the best harvest we've yet seen. We're fortunate to have a wonderful slate of new books by esteemed author-chefs filling our calendar for the coming months.

There are, of course, celebrity chefs. And then there are celebrity chefs — those whose renown has been earned at the stove, not on TV; whose cooking has actually changed American palates and habits; who have made a true and lasting impact on their communities.

So while the chefs we're looking forward to hosting this season may never have had to make a meal on a sound stage wearing a cojoined apron that helplessly ties them to another cook (as Top Chef memorably did to its contestants in 2010) or wrangle a Spam challenge (2013) — they have earned a celebrated spot in our food culture.

On Thursday, Oct. 16, join us for an aperitif and nibbles with Jean-Pierre and Denise Moullé, whose new title is French Roots: Two Cooks, Two Countries, and the Beautiful Food along the Way (Ten Speed Press; $35). Jean-Pierre cooked at Chez Panisse from 1975 until his retirement in 2012. Along the way, he and Denise — both French, they met on a Berkeley street corner and were soon married — divided their lives between Northern California (they still keep a house here in Healdsburg) and their native Bourdeaux.

French Roots tells their story interwoven with recipes both simple and complex. Jean-Pierre can happily spend hours in the kitchen; Denise's style is more straightforward. Both rely on the simplicity of excellent ingredients.

They join us for a very traditional French moment, the aperitif, which Denise describes as that moment when we allow "the day to fall away" and prepare for the evening to come. We'll serve Sonoma Aperitif, locally made from area fruit, as well as traditional foods (gougeres, rilletes, salmon tartare, and more) made from the recipes collected in the French Roots cookbook, and raise a toast with Jean-Pierre's own Vin d'Orange Champagne. It promises to be a relaxed, sophisticated evening with plenty of good stories and fun!

On Saturday, Oct. 25, we'll share news of what Petalumans have known about for years: Kathleen Weber's insanely delicious and thoroughly addictive breads and other baked goods. Her Della Fattoria bakery on the Boulevard simply boasts the best grilled cheese sandwich in the North Bay and her secrets are no longer closely kept. With her new title, Della Fattoria Bread: 63 Foolproof Recipes for Yeasted, Enriched & Naturally Leavened Breads (Artisan; $29.95), Kathleen takes bakers step-by-step from the most basic to more advanced breads, offering insight into her own experiences as well as hard-won advice gleaned from decades of coaxing yeast and flour and water to make miracles. Kathleen appears from Oct. 25 from 11:30am to 1:30pm to sign copies of her book and answer your questions. Free!

On Saturday, Nov. 1, we ramp it up considerably with an unusual night honoring James Beard Who's-Who inductee Charles Phan. His Slanted Door restuarant was also just awarded a James Beard Outstanding Restaurant laurel as well. This man is the real deal.

Charles travels north to SHED in support of his first cookbook, The Slanted Door: Modern Vietnamese Food (Ten Speed Press; $40) and comes to us for something of a gala night.

We begin outside with specialty cocktails and appetizers known to Slanted Door fans, move upstairs to the Grange for a communal meal with more Slanted Door food — this time paired with wines — and then return downstairs to the coffee bar for a dessert buffet, after-dinner drinks, and hot beverages for those who'd like them. While we dine, Charles will be in conversation with our own Lora Zarubin about his career and cooking. This promises to be an intimate, fun, delicious evening with one of the country's most talented chefs. We're pretty wowed about it ourselves!

On Monday, Nov. 10, help us to welcome Gabrielle Hamilton, owner of New York City's acclaimed Prune restaurant and author of its new eponymous cookbook, for a sit-down luncheon and far-ranging conversation.

One of only two chefs to have won James Beard Awards for both cooking and writing, Gabrielle's previous book was the much beloved Blood, Bones & Butter: The Inadvertent Education of a Reluctant Chef. The recipient of an MFA in creative writing from University of Michigan, Gabrielle is a home cook turned profession whose newest cookbook, Prune (Random House; $45) is a clever take on the back-of-the-house binders actually used in restaurant kitchens.

As she does for her own chefs, Gabrielle lays out exact specifications for the dishes in Prune, including notice of when you've taken a prep too far, things to watch for, and other homilies that help to make the food you like in restaurants a reality at home.

We're hosting Gabrielle to a luncheon featuring her recipes and including a wine pairing. Ticket-holders also get a copy of the book for with admission. $95 per person; $145 for a couple, all-inclusive. Join us on Nov. 10 at 12:30pm!