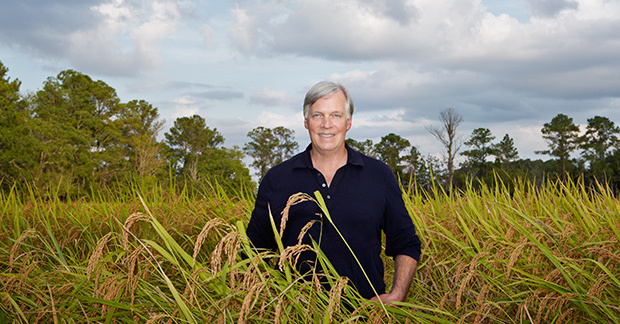 Depending on whom you ask, it could be that just five companies mill all the flour produced in the U.S. Of course, there used to be a mill in every town. Healdsburg still boasts a Mill Street, so named because that's where the townspeople ground their grains, the ones they grew themselves, using a stone to crush and water to move.

With the advent of steam rolling mills in the 1880s, flour production changed radically. Suddenly, it was cheap and easy to separate the three elements of a wheat kernel — the endosperm, the bran, and the germ — and discard the bran and the germ. With most nutritional benefits removed, the sole endosperm produces the flavorless, nutrition-free but shelf-stable white flour that Americans have been gumming for over a century.

(Add the bran and germ back in, and there's the "whole wheat" flour we've accepted as good enough, too.)

The new mills commanded demand for a new grain, too, one that could be prompted along quickly through its seasonal spurt with extra water and chemical fertilzers. As decades passed, heritage grains, local grains, and unusual grains with characteristic taste redolent of place were nearly forgotten.

But a revolution is afoot in the grain industry, one that finds farmers and producers circling back around to the days before the advent of steam rolling mills, when local economies produced and processed their own grains. When flour wasn't only nutritious and delicious, it was a mark of self-reliance and resiliency.

Nationally, Glen Roberts (shown above) of Anson Mills is retrieving grains and seeds nearly lost to memory and revitalizing their production. He has befriended legacy bootleggers for their most cherished varieties of corn and rediscovered vintage Carolina Gold rice, a taste-marker of Charleston.

Chefs like Dan Barber are writing books and speaking out on the importance of soil vitality and the cost of treating the farm like dirt. Barber's ideas are timely and important. His book The Third Plate looks at the concept of a whole-farm system and the vital role that home cooks and professional chefs alike can play in inventing cuisines that reflect sustainability and taste of place.

Locally, the Mendocino Grain Project's Doug Mosel is a leader. Doug taught us how to use our mill and regularly helps with the harvest and processing of such locally grown grains as those raised at Canvas Ranch, Front Porch Farm, and Foxwhelp Farm. We buy and purvey their grains and use them in our salads, crackers, and pastries at SHED. Doug has spearheaded a CSA-style "grain-share" that allows consumers to regularly obtain wheat from a 100-mile radius, and we are happy to be one of his "pick-up" spots.

In the Central Valley, Massa Organics is cultivating rice in delta waters like it used to be done, leaving fields fallow to regenerate, composting heavily, respecting the land.

So, what's the big deal about flour and grain and rice and corn? Probably just their role as the building blocks of the human race itself.

And it turns out, taking back the production and processing of these building blocks is a fairly radical act. Rather than allowing some five companies to produce for the entire country, nurturing local farming and production makes communities stronger. Mendocino has long had an eye to what might happen if Highway 101 were suddenly cut off due to natural disaster. With only a sea-coast route through, how would citizens get supplies? If they can grow their own food, including wheat for flour, how much stronger would they be? These are the kinds of questions that occupy modern farmers, and therefore — these are the kinds of questions that occupy us.