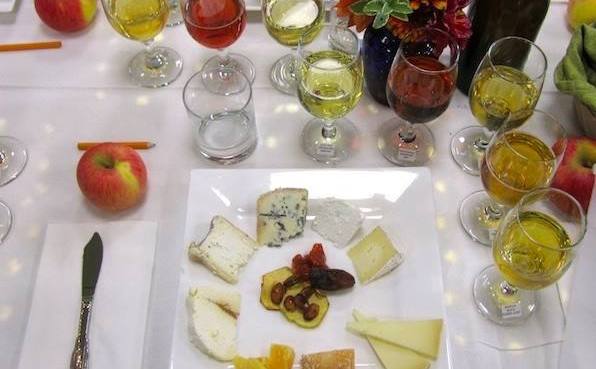 Ellen Cavalli didn't used to think much of hard apple cider. "Everything we'd ever tasted was just so sweet – it was just like apple juice with vodka," she says. "We wondered, what's so special?"

Cavalli, now the co-owner of Sonoma County's Tilted Shed Ciderworks with husband Scott Heath, has discovered exactly what is so special — with artisanal cider, at least. But she once was really only interested in farming and fermentation. Reasoning that cider-making is just farming and fermentation when she and Scott tried to make cider from their land's apples, they certainly didn't expect to stumble into anything unique. And then they took a sip.

"Once we tasted it," Ellen says, "it was a little light bulb went off."

What kind of a "light bulb"?

"First of all," Ellen explains, "that cider could be dry. That there could be other flavors going on there. We just started reading everything that we could on cider and that's when we started to learn about the history of cider, that there are special apples for cider, that there are people doing this in really traditional way. It just became an obsession. There's no rhyme or reason to it," she laughs. "It's just a hobby gone wild."

Ellen brings the results of her wild "hobby," Titled Shed Ciderworks, to our upstairs Grange on Sunday, Aug. 3, when she co-hosts a workshop panel on "Cider and Cheese" with Eataly's cheesemonger, Kay Michaels. Bringing an East Coast meets West Coast twist to the afternoon, the two will be in discussion with other Sonoma County cider and cheese makers, in part moderated by Kay's New York point of view.

“I can’t think of a better way to celebrate the start of apple harvest than to showcase small-batch traditional ciders with artisan cheeses, and enjoy what both coasts have to offer,” Ellen says.

The pairing isn't a surprise, though it might at first seem like it. Hard apple cider is like wine in many ways. Cider apples have tannins and complexity. Just as with a Cabernet varietal, an apple with both tannin and acids can be laid down for several years to mellow. Ellen reports tasting excellent French cider bottled in 2008 that's just reaching its point of excellence in 2014. Cider can also pack a surprising wallop in its Alcohol By Volume (ABV) rating.

"This is a very interesting point with cider," Ellen says. "We ferment to dryness. Just as with wine grapes, the factors with the apples change. Last year, because it was a long, dry growing season, we had really high brix, lots of sugars. The acid was lower, too, because they didn't gather that acidity that the coldness will bring.

"They're starting to pick grapes earlier to restrain the ABVs, but you can't quite do that with apples," she says. "The starches haven't converted to sugars yet and they're not quite ready. You're just dealing with unripe fruit. You shouldn't pick earlier because you don't have a fully developed apple. With grapes, you have more leverage when you pick."

When choosing a cider, Ellen advises checking the label. An ingredient that you don't want to see in your cider is water. Another is apple juice. Producers often add these liquids to lower the ABV of their product in order to satisfy federal food guidelines. A true hard apple cider has one ingredient: apples.

Ellen feels that the boom in cider production is just a part of the great food culture of the greater Bay Area. It is, she says, about "amazing food and excellent farming and the things that go along with that. That's what I believe the Bay Area really stands for now. We're trying to do that with cider."

She continues. "We're saying: Here's something that's totally mundane, and you have this expectation that it's just going to be TreeTop apple juice with a shot of vodka — and guess what? You're wrong."