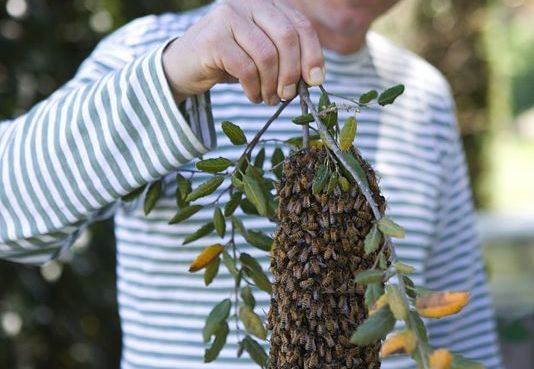 SHED co-founder Doug Lipton with a hive ready to swarm on HomeFarm; photo by Caitlin McCaffrey

You can hear them in the video before your eyes have a chance to understand what you're seeing. The hum is loud and unwavering, not melodic, but not unpleasant. It sounds warm.

And in fact, it is warm. Not the sound, but the mass of honeybees that the man is holding in his hands. Working with the bees just as they are about to swarm, he gently cups hundreds of them and, just as gently, shakes them from his hands, like sloughing delicate grains of sand onto the log he's suggesting they occupy. The phone recording this movement wobbles. "Oh. WOW," a woman says.

For holistic beekeeper Michael Thiele, moving a swarm of honeybees without smoke or fuss — with his bare hands — is not only a natural thing to do, it's the kind thing to do. The bees are ready for a new home, a reincarnation if you will, and he is merely their midwife.

Also called a "radical" beekeeper, Thiele owns Gaiabees and co-founded the Melissa Garden pollinator sanctuary in Healdsburg. He presents two workshops at HomeFarm Saturday-Sunday, April 26-27. Saturday is "Biodynamic Apiculture for Beginners"; Sunday, "Zen and the Art of Living with Bees."

Scientists regularly refer to bees as "super organisms" or "macro organisms" because the individual insect is like a molecule within the hive, which taken in toto collects as one being. In Thiele's native German, that being is known as a Bien (pronounced "bean"). Most incredibly, that Bien is most often compared to mammals. While an individual bee is a cold-blooded insect, the Bien produces heat at about 98 degrees Fahrenheit. Where a mammal produces milk, the Bien produces royal jelly. And so on.

"It's classified as an insect," Thiele says, "but when we look closer, we'll find out that there are lots of parallels between mammals and bees. Even very renowned entomologists are doing cutting-edge research on this and have come up with a new name: they call it the 'mammal with a thousand bodies.'"

For Thiele, it only follows that if the Bien is a mammal, it also has a soul.

"We have mainstream researchers talking about the emotional capacities of bees. I'm not quoting mystics," he says. And the soul of a Bien, he says, is service.

"Service dominates all of the decisions made by this organism," Thiele says. "The level of altruism they exhibit is just enormous. When you look at the individual bee, everything they are doing is about living a selfless life to serve the one being — and also to the serve the world."

But as the headlines clearly relate, the world isn't doing much to serve the bees. Colony Collapse Disorder threatens bees worldwide, and if the bees go, we mammals won't be far behind. Producing at least one-third of the food we eat through pollination, honeybees are a significant tool for productive life on Earth.

And yet perhaps the biggest error that humans have made with bees is to treat them as tools. Last week, it was reported that some 80,000 hives were killed during the annual almond pollination in the Central Valley. Beekeepers blame the death on daytime pesticide application, sprayed while the bees were foraging. Thiele disparagingly calls those who bring their hives to rotational pollination, as with our massive almond groves, "investment bankers."

"What they move is assets; they move investments," he says. "They don't consider them as bees. It's all money. They just have to keep them alive. They feed them high fructose corn syrup, and their practices have nothing to do with beekeeping."

Among the indignities forced upon commercial bees is their very hive. Most industrial hives come equipped with a plastic comb already inserted to make harvesting honey easier.

"The bee makes its own comb, and the comb has many qualities," Thiele explains. "It's the skeleton of the Bein, it's also what entomology calls a 'social uterus,' it's linked to the immune system of the nest, it's part of nest memory, and metabolism happens within the comb. Ninety-nine percent of all managed hives in this country live in plastic combs. It's a hexagonal embossed sheet of plastic that's actually carcinogenic and the cell size does not match the bee's natural cell size."

Instead, Thiele advocates for and teaches about creating natural bee hives, such as those formed from old logs, that allow the bees to create their own comb.

To help educate about these practices and inform about better bee treatment and living harmoniously with our pollinators, Thiele regularly teaches all over California. His two-day residency at SHED's own HomeFarm begins on Saturday, April 26, with "Biodynamic Apiculture for Beginners," which features instruction on alternative hives and understanding the very nature of the Bien.

On Sunday, April 27, he teaches "Zen and the Art of Living with Bees," which allows attendees to experience the honeybee from various vantage points. Both days include a farm fresh lunch from the surrounding fields.

Learn more about Michael Thiele's work on his website, Gaiabees.com.

And most of all, treat the bees that you encounter with respect.