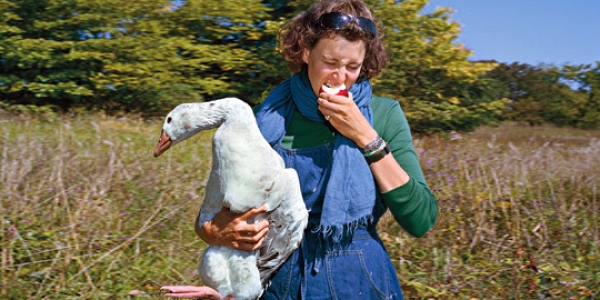 Fleming should know. The founder of the Greenhorns, a national grassroots coalition that helps connect young people to each other, to mentors, to land, and to best practices, Fleming got involved in agricultural activism while still a student at UC Berkeley. Her eponymous Greenhorns documentary did more than give direction for her first post-collegiate decade; it spawned a movement.

Fleming appears on Friday, March 7, to discuss the movement, their Grange Future project, and more in a special evening at SHED.

With a mandate to promote, recruit, and support new farmers in America, the Greenhorns are an unlikely group of radicals. But radical they are; they may not occupy Wallstreet, but they do aim to occupy Big Ag.

"Ultimately, the system that we have now, this mega-corporate global economy, is profoundly unsustainable," Fleming says. "Building a system that's sustainable is where society meets ecology — and that's agriculture."

Sounds rather mild, doesn't it? Yet, as one young man tells the camera in a short Greenhorns clip, "This is as close to being an anarchist as I can get." In our increasingly monopolized economy, it seems, the best way to stick it to the Man is to do it for yourself.

"While there are challenges, there are really profound opportunities," Fleming stresses. "There's a lot of unused land. There's a real appetite in urban areas. There are wonderful elders in the community who have been managing organic farms for decades who are incredible teachers.

"If you can screw up your courage enough and be dogged, it's a very compelling movement to be a part of," Fleming says.